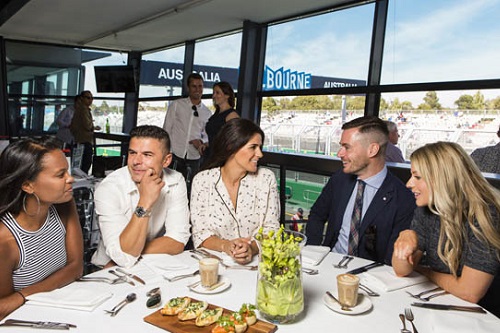 Building on the premium experiences delivered at the event over the past 23 years, the three companies will deliver new food and entertainment products at the Formula 1® Australian Grand Prix 2019, from 14th to 17th March next year.

Advising that the three hospitality partners will provide Grand Prix guests with more innovative and cutting-edge dining options than ever before, AGPC Chief Executive, Andrew Westacott stated “we are extremely proud to partner with the superpowers in major event catering to deliver an unparalleled hospitality experience for our customers.

“Formula One is built on innovation, prestige and entertainment. The offerings will showcase the very best of Victorian produce and exquisite culinary creations not only to redefine the hospitality experience but reaffirm our position as a leader in the Australian major event space.”

AGPC General Manager of Sales, Commercial and Marketing, Corina Black, said she is delighted to welcome Atlantic Group, food&desire and GEMA Group on board as hospitality partners for the Formula 1® Australian Grand Prix 2019.

Black added “the hospitality segment is going through a period of substantial growth. No longer is it just about great food - event dining has evolved to become the ultimate fusion of food and entertainment.

“Following a robust and competitive tender process, these three caterers were able to demonstrate their ability to revolutionise hospitality as we know it, and deliver the best in quality.”

With a range of bespoke hospitality packages available, the Formula 1® Australian Grand Prix 2019 is the one place where the world’s biggest stars, glamour, fashion and fast cars come together to create exciting and unique experiences.