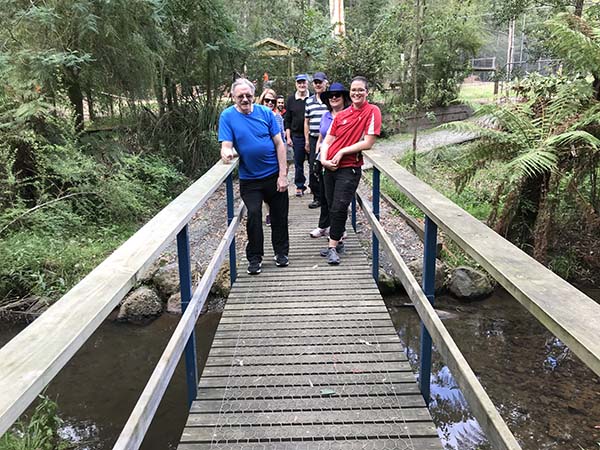 YMCA Victoria has completed an adventure camp for older adults, working with the Macleod Recreation Centre and Mt Evelyn camp, to expand a program which they have been running across the YMCA centres.

Proving that people are never too old to try new things, and that camp activities like archery, the giant swing and high ropes are not just for school children to enjoy, senior adventurers participated in Macleod YMCA’s first Active Adults Outdoor Adventure Camp on 15th April.

Macleod YMCA is owned by Banyule Council which is a member of the World Health Organisation’s Global Network of Age-friendly Cities.

At 85-years-old there’s a lot Keith has accomplished but at YMCA Mount Evelyn’s Recreation Camp, Keith went on an 18-metre giant swing for the first time saying: “It was very challenging and apprehensive, but it was really worthwhile doing!”

Keith was one of 14 adventurers aged from 58 to 85 years old who attended the day camp which is located in the outer suburbs of Melbourne. Many of the participants bravely swung high in the treetops on the giant swing and also tried archery and bushwalking – all with plenty of laughs and good humour in the great outdoors.

Macleod Community Engagement Director Chris Arena said the day was about providing older adult community members in Banyule with something new and different that they may not have tried before.

Arena advised “about 36% of the Banyule area are aged 50 years and over, we know that being active and being social has outstanding benefits for one’s health and wellbeing."

At a more personal level, Arena said he enjoyed the chats with the members and hearing about their lives, especially on the bus trip to the camp, adding "a lot of them were talking about growing up in the local area around Banyule and what it used to be like. A lot of them talked about their families and some even talked about experiences with war.”

The feedback from participants was extremely positive. And would Keith swing again?

Without delay he replied, “yes, I would.”

Active Adults Outdoor Adventure Camps will run across other YMCA centres in Victoria.