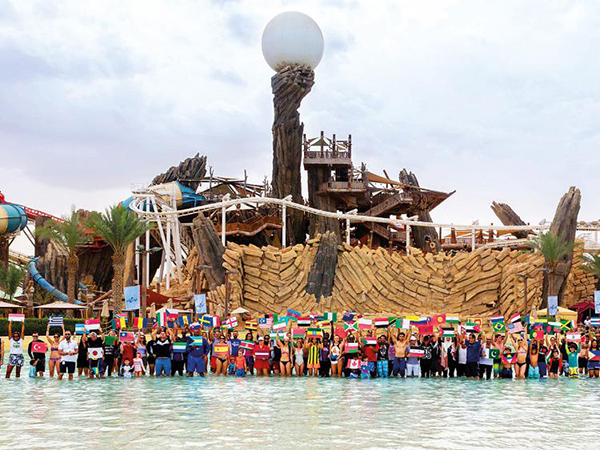 Yas Waterworld Abu Dhabi, in celebrating the UAE's Year of Tolerance, has succeeded in its attempt to set the Guinness World Record for ‘Most Nationalities in a Swimming Pool’.

2019 was proclaimed the Year of Tolerance by the UAE Government to strengthen the nation’s role of encouraging stability and prosperity in the region.

The event at Yas Waterworld saw people from 102 nationalities come together to represent their home countries and celebrate the values of coexistence and tolerance that the UAE has long embraced.

The event was held in the presence of Guinness World Records representatives as well as Farah Experiences and Yas Waterworld senior management.

Showcasing a deep sense of community, Yas Waterworld guests revelled in the celebratory atmosphere, as they held their countries’ flags while standing in Amwaj Wave Pool, to help take the water park to Guinness World Records fame.

The waterpark’s guests from across the globe then went on to experience the park’s 40 rides, slides and attractions including Cinesplash, the region's first 5D water adventure.

Yas Waterworld, was named the world's leading waterpark at last year's World Travel Awards and is managed and operated by Farah Experiences.

The inclusion event at Yas Waterworld follows on from the 2019 Special Olympics World Games held in March at the Zayed Sports City in Abu Dhabi. The first Games to be held in the Middle East aimed to challenge misconceptions, overcome prejudice and promote inclusion about the potential of those with intellectual disabilities as well as promoting the region’s event hosting capabilities.