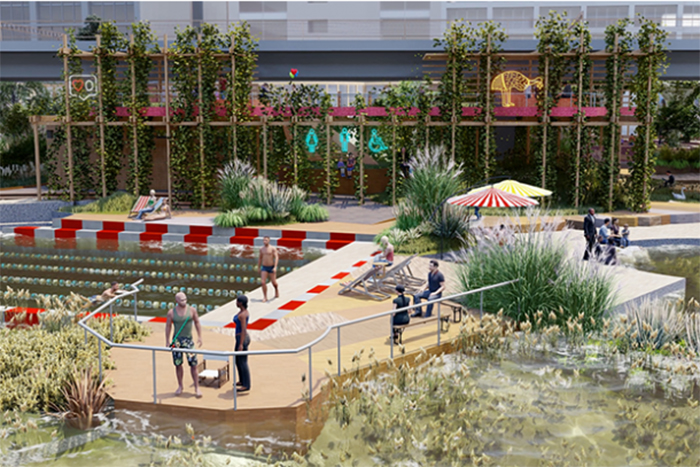 Yarra Pools have teamed up with WOWOWA Architects to realise community vision in their design concepts for Melbourne’s river front Yarra pool.

The Yarra Pools concept was first announced in 2016 as a floating swimming pool on Melbourne's Yarra River. Since then, its instigators have been working hard to engage Melburnians, organisations, traditional owners and government agencies to develop a collective vision for the project.

The diversity of uses and array of native vegetation seek to create a true oasis for recreation and a water focused meeting place for the community. With the city’s population growing by more than 100,000 per year the city is in desperate need of quality open space that caters for a diversity of active recreational uses.

This new vision and design was first featured in Hong Kong’s Business of Design Week 2018, and was created with the generous support of National Gallery of Victoria.

The concept has been inspired by urban river swimming projects both locally and globally, with the proponents behind the proposal citing global examples such as Copenhagen Harbour Baths, New York's Plus Pool, Paris' Canal Swimming Pool and Helsinki's Allas Sea Pool as sources of inspiration.

The Yarra Pools proposal however, has a distinctly Australian context, reflected in the inclusion of wetlands, a natural leisure pool and native vegetation. 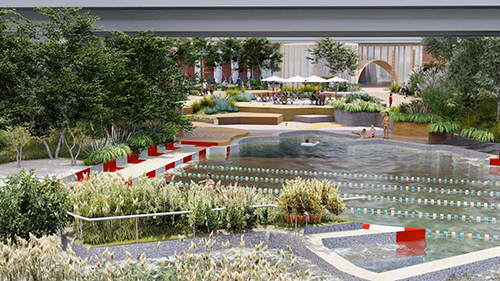 Yarra Pools President Michael O’Neill explains “this new design render is the culmination of two years of deep research into what Melburnians want the Yarra Pool to be. It’s based on our core design principles that were shaped by extensive community engagement, existing government strategies and regulation, and economic considerations for the City of Melbourne.

“We now need key decision makers to get behind the project. The feasibility work is showing us that there is a definite need for a facility like this which will also tackle the well-known urban design challenges around the north bank.

“First and foremost this design concept is for the people of Melbourne, the residents of the CBD and Southbank, the city workers and people who visit the CBD regularly. We want them to be excited about the possibilities of what they see.”

Through Yarra Pools User Needs Analysis, an array of core principles and objectives were developed, which culminated in the design brief taken up by WOWOWA. Some of these include: being usable all year round, having a positive environmental impact, accommodating a wide variety of uses, and celebrating the unique cultural values at the site.

Monique Woodward Director WOWOWA Architecture added “this site has been the heart and home for the Kulin people for thousands of years. The design is focused on the rejuvenation of this culturally significant place into a rich natural environment.

"The swimming pools emerge from this newly formed landscape to create a rich tapestry of spaces for leisure, events and water activities, transforming this dense urban edge of city.

Peak bodies that have been consulted included existing traditional owners, Yarra River users, existing Enterprize Park users and the wider community in addition to peak sports, health and education bodies amongst others. 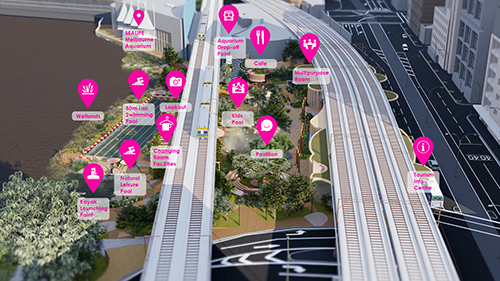 Tim Bracher, Executive Officer of the Yarra River Business Association stated “this would be a great addition to the Yarra River’s recreation offer, and a big improvement to the amenity of northbank."

The proposal is backed up by business modelling which shows there is a definite need. Analysis delivered by EarthCheck predicts that such a facility would attract 350,000 people per year, just for swimming. This number would grow to 550,000 by 2036.

The north bank location is currently underserved for affordable hospitality offerings despite the riverside location. The Yarra Pools would represent a unique recreational facility significantly broadening the city's visitation offering particularly in the areas of outdoor and active tourism.

Many of the world's most liveable (and colder) cities including Helsinki, Copenhagen and Paris have embraced riverside pools. While Vienna, who recently surpassed Melbourne in the Economist’s liveability rankings has successfully promoted river swimming for years. The overall Business Case is being delivered as a collaborative effort by EarthCheck, Arup and Yarra Pools and supported by Melbourne Water through the Yarra Strategic Plan.