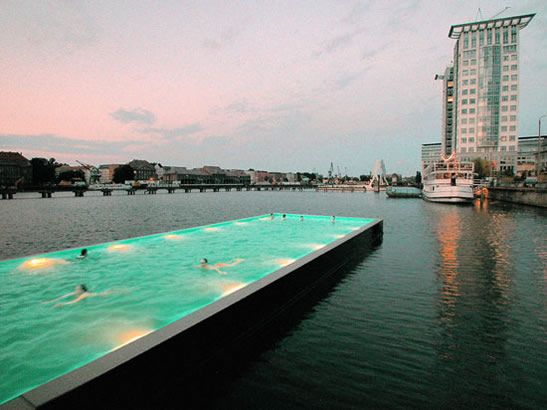 A floating swimming pool opposite the Adelaide Convention Centre on the city's River Torrens is among suggestions to redesign, renew and reactivate the capital of South Australia.

The concept, suggested as part fo the South Australian Government and Adelaide City Council's 5000+ project, would resemble the New York floating pool and the The Badeschiff, a public pool floating on the River Spree in the German capital of Berlin.

The New York pool continues a tradition of floating baths in New York's River Hudson (in the early 1900s there were 15 floating baths) while the German pool, with a surrounding deck and childrens pool was built from a converted old vessel in 2004 to enhance Berlin's recreation provision along a neglected stretch of the polluted River Spree.

Since June 2011, the 5000+ project has been collecting and enabling ideas and propositions from design professionals, businesses, not for profit organisations, Government agencies and academia for the for the redesign, renewal and reactivation of inner Adelaide.

Creating a "vibrant city" has emerged as a key theme among many of the ideas already uploaded to social media sites and is also the focus of this week's feature blog on the 5000+ website.

Other ideas include a Wakeboard Park in the River Torrens, building a number of themed playgrounds in the Adelaide Parklands, converting the western parklands into a 50 hectare 'city farm' and adding a new 50 metre swimming pool in the western pakrlands.

Integrated Design Commissioner Tim Horton explains that "as we enter into the next phase of 5000+, we will be investigating how these ideas might work together, who needs to be involved in making them happen and what are the next steps we need to take."

Encouraging further input from those with an interest in Adelaide's future Horton added "there's something delightful about sharing an experience with thousands of other people and sometimes Adelaide shies away from that because we have become used to empty streets and quiet places.

"It's trying to bring some of that energy into the city, its laneways, parks and squares."

For more information go to http://5000plus.net.au