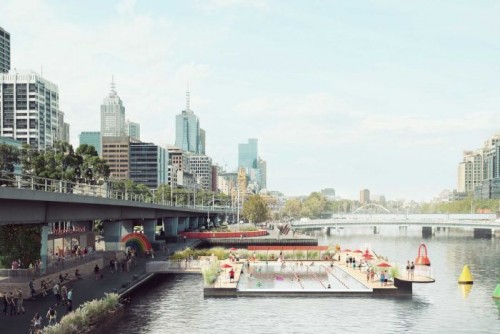 A concept for a floating swimming pool on Melbourne's Yarra River could become a reality with three years, according to its backers.

Named Yarra Pools, the proposal will be launched at the Venice Architectural Biennale Exhibition on Saturday.

Current construction cost estimates from collaborating engineering firms put the price at $6 to $8 million to complete.

Should funding be found, stakeholders agree the pool could be open to the public within three years.

Matt Stewart, President of not-for-profit group Yarra Swim Co told the ABC “if we are able to secure the funding to build the main pool we're proposing, Melbournians and tourists could be swimming in the Yarra by the summer of 2019, 2020.”

Stewart and associate professor David McCarthy from Monash University's Centre for Water Sensitive Cities have been working closely on Yarra Pools to take the idea from concept to construction.

Stewart added “we've been working on the technology for over a year now. But the idea's been around for at least two years.”

However, the Yarra Swim Co plan to use state-of-the-art water filtration to deliver clean water.

The concept resembles the New York floating pool and the The Badeschiff, a public pool floating on the River Spree in the German capital of Berlin. The New York pool continues a tradition of floating baths in New York's River Hudson (in the early 1900s there were 15 floating baths) while the German pool, with a surrounding deck and childrens pool was built from a converted old vessel in 2004 to enhance Berlin's recreation provision along a neglected stretch of the polluted River Spree.

The Victorian Tourism Industry Council said it supported the concept and hopes it will help activate the Yarra river's north bank in Melbourne.

VTIC Chief Executive Diane Smith said it would be reminiscent of the river's history of swim races, when the water quality was higher.

Smith stated "I think it's wonderful to look back to our heritage and embrace that.”