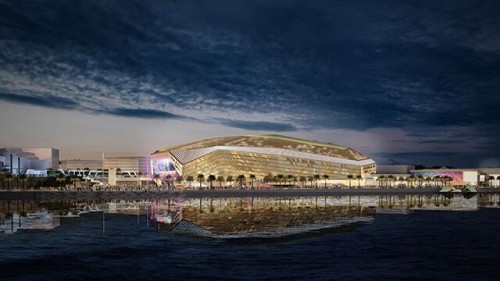 Developers Miral have provided an update on the progress of Yas Bay - Abu Dhabi’s new waterfront destination on Yas Island, that, when complete, will feature an 18,000-capacity indoor arena, cafes and restaurants, a pier, promenade, infinity pool and hotels.

The Dh12 billion (US$3.2 billion) mega project on the southern end of Abu Dhabi's Yas Island covers 100 hectares and, as of the beginning of this month, 75% of work is complete at Yas Bay Arena - the Emirate’s new indoor venue which is scheduled to open next year.

“The mixed-use development will be a vibrant and iconic addition to Yas Island and a new, exciting destination for Abu Dhabi. With key construction milestones being achieved, we look forward to working with investors and partners from across the world to further develop this unique destination that sets a new benchmark for Yas Island and the UAE.

“With this investment, we are contributing to the emirate’s vision to diversify the economy and getting closer to positioning Yas Island as one of the top global destinations for entertainment, leisure and business."

Set to compete with Dubai's Coca-Cola Arena, Miral executives are confident Yas Bay Arena will be a significant live events venue in the Arabian Gulf and the Middle East region. 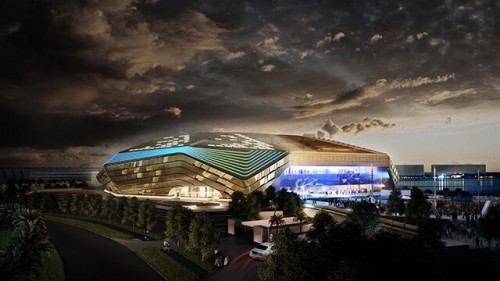 Jonathan Brown, Executive Director for Development at Miral, stated "yes, we may have competition ... but we believe the facility we are constructing is absolutely required in Abu Dhabi. There is no other indoor, air-conditioned arena that can cater to 18,000 people."

Throughout the development, executives have stressed the precincts sustainability initiatives and the was high on the agenda when it came to Yas Bay and hinted that the Arena will aim to be a ‘zero plastic’ venue, while the façade’s ’fins’ will reflect the sun, reducing the air-conditioning requirement.

These elements have already received recognition with the building’s design being named ‘sustainable building design of the year’ at the Middle East and North Africa Green Building Awards last year.

Brint Jackson, General Manager of Yas Bay Arena, told venues alliance Coliseum “we want to be one of the most sustainable arenas in the region and we want to get up to the standard of some in the western market.”

Kackson will be a speaker at this year’s Coliseum Summit MENA, to be held on 30th and 31st October, giving an overview on Yas Bay Arena development.

Delegates will have the opportunity to tour the new arena site while Miral will also be a part of the conference.

Images of the Yas Bay Arena courtesy of Miral/HOK.