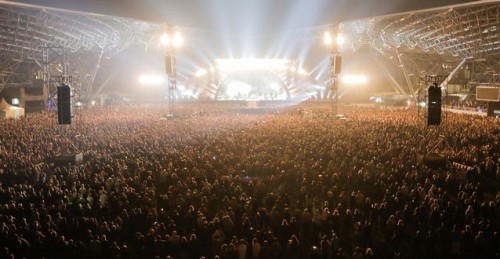 Dubai-based telecommunications company du and Flash Entertainment has announced an extension to their deal for the naming rights to the du Arena and du Forum in Abu Dhabi.

The companies made history in 2012 when they conceptualised and signed the Arabian Gulf region’s first ever venue naming deal.

The renewed deal will now offer a number of exclusive benefits to du customers including priority tickets with a 20% discount available 48 hours before general release, access to the du Live! VIP Lounge and competitions offering ‘meet and greet’ options with performers.

Since 2012, over 465,000 fans have seen more than 80 concerts, shows and festivals at both venues. Signature events held at the du Arena include the Yasalam After-Race Concerts with internation music superstars including JAY-Z, Paul McCartney, Lionel Richie, The Rolling Stones, Coldplay and Andrea Bocelli.

The du Arena on Yas Island is the largest open-air venue in the region, with capacity to host up to 40,000 people.

Commenting on the extension of the naming rights deal, du Chief Executive Osman Sultan stated “our partnership with Flash Entertainment has gone from strength to strength over the last four years - du Arena and du Forum are preferred destinations for live entertainment and experiences, and through our continued partnership with Flash, our vision is to create value for our customers with the highest calibre of live entertainment, bringing them even closer to unmissable events and top-tier artistes.”

The 4,500-capacity indoor venue du Forum hosts a broad portfolio of events and recent shows have been put on by world-renowned composer Yanni, community festival Winterland Carnival, and Disney’s Beauty and the Beast.

Flash Entertainment Chief Executive John Lickrish added “(this) announcement is yet another significant moment in the development of Abu Dhabi’s growing entertainment industry.

“Since the start of our partnership with du, we have together created one of the most important venues in the MENA region and presented the finest, world-class entertainment programming.

“While establishing itself as the UAE’s top, must-play venue, the du Arena has attracted a slate of top international performers to the region."