Woolworths backs Australian cricket from grassroots to the elite level 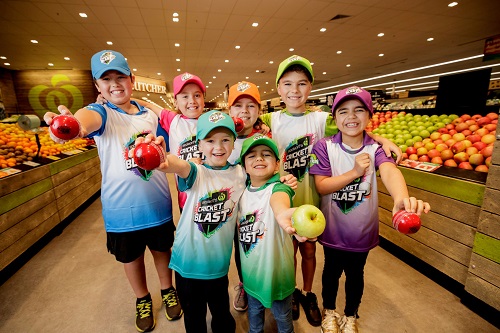 With the 2018/19 season underway, Cricket Australia has joined forces with Woolworths in a series of partnerships to support all levels of the game.

The most high profile element of the new partnership has been a series of videos and advertisements encouraging children to ‘Join the Fun’ by taking part in the new Woolworths Cricket Blast program.

The new program is replacing the in2CRICKET and T20 Blast programs in schools and clubs from this season.

The promotion takes the form of a music video, with an original cricket rap performed by a diverse range of youngsters wearing various Big Bash franchise colours.

Commenting on the campaign, Cricket Australia Executive General Manager, Events and Leagues Anthony Everard stated “I am very excited about the roll out of this youthful and fun campaign to promote the highly anticipated Woolworths Cricket Blast program.

“The campaign helps to show all of the positive aspects of getting involved in our great sport to kids and has also been designed to be as useful as possible to the many people working within grassroots cricket to attract and encourage the next generation of players and fans.”

Customisable flyers and posters are also available for schools and cricket clubs to increase the local flavour of the campaign.

In addition to the naming rights of Woolworths Cricket Blast, Woolworths will be involved with the Mascot Challenge, a school program for kindergarten to year two students, junior cricket formats, regional talent academies, as well as male underage teams and championships.

Acknowledging the value of the partnership, Cricket Australia chief executive James Sutherland stated “we are delighted to have Woolworths on board as a partner across the Australian junior cricket pathway and to have them providing support from grassroots to elite levels of the game.

"We are confident that the Woolworths team, together with cricket’s 4,000 clubs and thousands of volunteers, will bring this partnership to life in a positive way, making it easier and fun for more kids to eat well, be active and play cricket.”