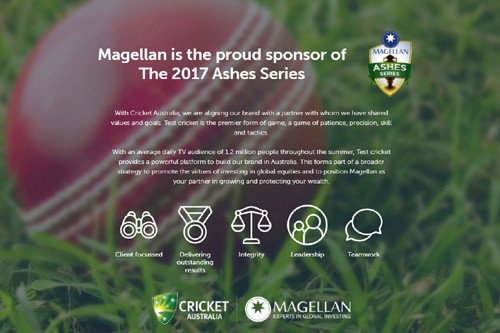 The naming rights sponsorship of the men's national cricket team's domestic series, estimated by the Australian Financial Review to be worth $20 million, only started ahead of last summer's Ashes Test series and was supposed to run until 2020.

Explaining the company’s decision, Magellan co-founder and Chief Executive Hamish Douglass said the ball-tampering in South Africa was "so inconsistent with our values that we are left with no option but to terminate our ongoing partnership with Cricket Australia".

Qantas, whose logo is prominent on the Australian team's shirts, said today it would continue its sponsorship, despite Chief Executive Alan Joyce saying on Tuesday he was, "very disappointed" with the incident.

The players at the heart of the scandal, former captain Steve Smith and vice-captain David Warner, who have today received 12-month bans from Cricket Australia have also lost personal sponsorships.

Sanitarium have dropped Smith from endorsing Weet-Bix while consumer electronics brand LG has confirmed it will not be renewing its sponsorship deal with Warner.

In a statement, Sanitarium advised "Weet-Bix ambassadors represent our brand values of trust and integrity … based on the ball tampering incident and the findings of Cricket Australia's investigation, we are unable to continue our relationship with Steve Smith.

The Commonwealth Bank has also dropped Smith as one of its cricket brand ambassadors, leaving just Meg Lanning and Ellyse Perry as its remaining cricket endorsements.

As a result of the scandal, ASICS has terminated its sponsorship contracts with Warner and Cameron Bancroft, effective immediately.

The company, which supplies uniforms to the Australian team, announced on Twitter it had severed ties with the pair, "effective immediately".

Besides their lost income from Cricket Australia, the trio also face significant financial losses through endorsements.

Cricket Australia is in turn facing uncertainty over its future broadcasting arrangements, with longstanding partner Channel 9 today announcing that it has secured rights to the Australian Open from Channel 7.

This may leave the Nine Network with a smaller budget and reduced schedule for cricket in future years.