Warning to parents over ‘floating killers’ 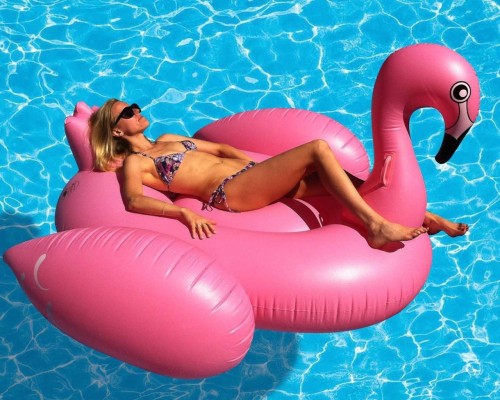 Parents are being urged not to let their children use large inflatable toys anywhere other than swimming pools following a spate of incidents in Australia and overseas which resulted in one woman's death and numerous rescues.

Surf lifesaving associations and coastal water bodies across the world have issued warnings about the toys, which are now more readily available than ever before thanks in part to cheaper models flooding the Australian market.

Among the most popular items this summer are large floating flamingos and unicorns, which can be purchased from major retailers for as little as $20.

"There is a misconception that flotation devices mean that you are safe when in fact they can actually put users at risk.

"Surf lifesavers, lifeguards and members of the community are known to have been involved in situations where they have had to rescue people who have gotten into difficulty.

"Caution with any flotation device needs to be taken, especially with children and inexperienced persons.

"Parents and caregivers can often be lulled into a false sense of security thinking that the child or themselves are okay because they have a flotation device, however this is wrong.

"Situations have included people being blown out to sea, or beyond their depth and the toy turning over and people panicking. In these situations, things can go wrong very quickly.

"Regardless if at the beach, in a pool or on the river, the use of these devices should always be under supervision."

At the time, the Association said its lifesavers had performed an average of one rescue per week linked to the inflatables.

Apart from the ability to drift large distance in a short space of time, SLSA says there are a number of other hazards associated with using the devices on waterways, advising “they are very unstable and difficult to stay on.

"They catch the wind very easily, are light and move in currents very quickly. They drift far and fast, up to 500 metres out to sea in five minutes in the wrong conditions.

"People don't know when to abandon the craft and jump off and swim to shore."

SLSA warns that even under adult supervision, the devices are not safe outside a swimming pool due to the speed in which something can go wrong.

They are also not designed to carry more than one person, even though lifesavers have often spotted multiple people on the same device.

SLSA say only those water craft designed for use on open water, and which carry Australian Safety Standard Ratings, should be used outside swimming pools.

Melbourne newspaper the Sun Herald reported a fisherman rescued the four girls who were on the backs of two giant inflatable flamingos, a dinosaur and a unicorn which floated more than 400 metres from Phillip Island, south-east of Melbourne.

After rescuing the girls and dropping them back to shore with their floaties, the fisherman later shared the tale on his Facebook page.

Image: Inflatable pool toys as illustrated are not for use in open water.