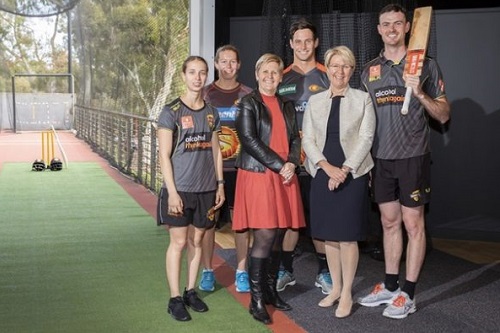 WACA Chief Executive Christina Matthews and Vice Chancellor Eeva Leinonen formalised the partnership with an aim to strengthen connections across the University and bolster opportunities for research, scholarships, and student development through work-integrated learning placements.

Murdoch Sports Science researchers and students have started working with WACA cricketers to improve their performance and major upgrades to Murdoch’s sporting facilities to meet high-level cricket standards are proposed under the new partnership.

Murdoch’s Head of Exercise Science, Dr Sean Müller, said the current research was monitoring the training load in elite cricket players in various playing roles on the team, advising “we will use micro-sensors to examine the loading on players during rotational and impact movements.

“For example, micro-sensors will be used to measure distance covered and impact loading during bowling, as well as the change of direction performance when running between the wickets.”

Professor Leinonen said Murdoch valued its long-term relationship with the WACA, which shared core values in being a world-class, innovative Western Australian-based organisation with a strong global focus.

Professor Leinonen stated “this partnership will continue to provide multiple collaborative opportunities for our researchers and students as they share knowledge and develop skills in this elite sport environment.

“We look forward to working with the WACA to offer scholarships and development opportunities for students and our staff and to extend our support for local sport and the community through our facilities.”

Matthews said Western Australian cricket had a major following in key domestic and international markets; and was growing in popularity with women, as both players and spectators of the sport.

Matthews concluded “the WACA has an annual audience reach of over two million people through Perth Scorchers match days, our membership and social media followers, and at the community level - including club cricket, social cricket and schools programs.”

“In addition, from a broadcast perspective, the Perth Scorchers attract over 35 million viewer hours nationally across both the Rebel Women’s Big Bash League and KFC Big Bash League.

“We are looking forward to supporting cooperative research projects and knowledge-sharing between the two organisations and consolidating what can be achieved through the combination of tertiary education and elite sport.”