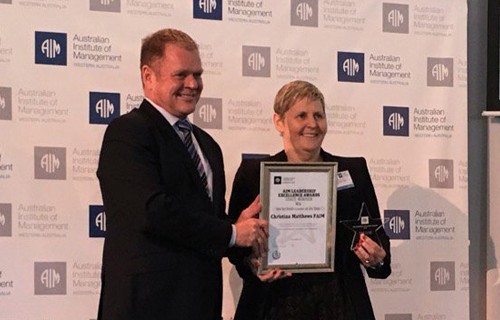 As the only female Chief Executive in Australian cricket, Matthews has been at the forefront of driving greater diversity across the game and challenging the traditional attitudes and values entrenched in the cricket environment.

With cricket undergoing a period of significant change, particularly in the area of diversity, Matthews is focussed on ensuring a strong and sustainable future for Western Australia cricket.

Over the past 12 months, Matthews has led a team that has negotiated with the Western Australian Government for international cricket matches and Big Bash League matches to be played at the Perth Stadium once it is completed.

This will be the first time these matches will be played at a venue other than the WACA Ground since international cricket was first played in 1970, and will mean a shift from a 21,000 capacity venue to the new 60,000 stadium, providing enormous business opportunities for the Association.

As testament to the hard work and strong negotiations applied by the WACA and Cricket Australia, cricket was the first sport to sign an ongoing agreement to play at Perth Stadium and, to date, is the only sport to have signed an agreement.

Throughout Matthews’ career as a player and administrator, she has mentored those around her to support and encourage them in becoming the best they can be.

From a playing perspective, she has coached many players and set up programs and pathways that achieve results. As a manager, she endeavours to ensure females are recognised and structures are in place that enable them to take on positions of influence.

Matthews was instrumental in leading discussions with Cricket Australia on increased pay for female players and challenged the national body on their prioritising of women's cricket. This resulted in an increase in pay for females with a clear strategy in place to progress women to full-time athlete status, and ensured a clear vision for the future of the Women’s Big Bash League.

The implementation of a structured values and behaviour model was a key change Matthews made at the WACA, which led to an overhaul of the Association’s structure to reflect its strategic plan and vision. The WACA’sstructure now demonstrates clear responsibility and accountability, which enables optimum performance and alignment with staff roles and the Board.

Matthews said she believed leadership was about being a role model, developing strong relationships, collaborating and demonstrating the same behaviours asked of staff.

Matthews explains “the WACA’s vision is to be leaders in Australian cricket and this guides everything our staff, management, Board and I do. We strive to constantly challenge what we do and look for better ways to achieve our goals.

"I believe it is important that I provide guidance and support to the WACA’s management and staff, allowing them the flexibility to be innovative, improve processes, take risks and challenge themselves.

“In an industry that is constantly changing to meet consumer demands, it is important to enable our people to challenge the norm and provide them with constructive feedback and support to ensure their success, as well as organisational success.

"The area of influence that I am proudest of is how I have been able to influence change in the governance practices of the WACA Board.

"Following thorough research and collaboration with key Board Members, I have been able to introduce new processes and practices that have led to increased productivity and effectiveness. I have also assisted in the introduction of a full governance review that is underway, which, if recommendations are passed by Members, will see the WACA positioned as a leader in sports governance in Australia.”