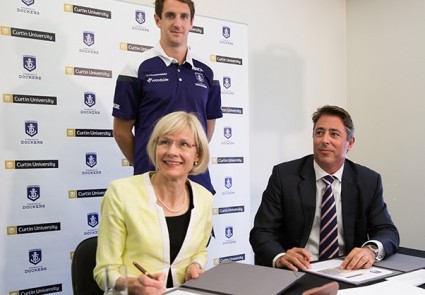 The Fremantle Dockers and Curtin University have formally announced an alliance, with the club and the university sharing ongoing student placements and research opportunities.

Dockers General Manager of Strategic Projects Brad Paatsch said the alliance with Curtin University was both integral to the club’s new elite training and administration facility (ETAF) at Cockburn Central West, which will be integrated with the City of Cockburn’s new regional physical activity and education centre, and to the ongoing development and performance of the club on an off the field.

Paatsch explained “it made sense to approach Curtin University in the first instance about forming an alliance from an exercise science and physiotherapy point of view.

“Through further discussions it became apparent that Curtin had a strong presence in the area of multimedia studies and that became an initial focus as well.

“Additionally, Curtin’s involvement with the City of Cockburn in the nearby GP Super Clinic and the university’s focus on its growth and presence in the South-West Growth Corridor further strengthened the opportunity for an alliance.”

In the 12 months leading up to the alliance being formalised, Curtin’s film and TV undergraduate students have been providing video and written content for the club’s website via their coverage of Peel Thunder games.

This will expand to four masters’ students being attached to Fremantle’s Media and Communications Department throughout 2016, ahead of the club’s move to its new facility at Cockburn Central West in 2017. 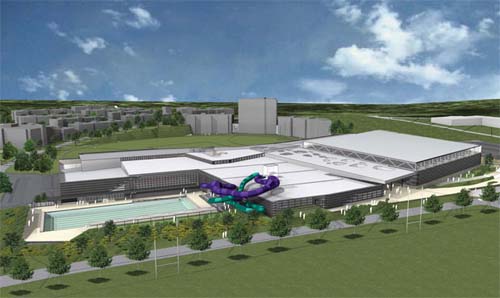 In 2016 and beyond, Curtin’s film and TV students will provide additional content, including the production of a football panel show.

In the future, undergraduates in the areas of exercise science and physiotherapy will have the opportunity to gain practical experience and “real world” employment and training opportunities at the club plus undertake research.

The agreement allows for Fremantle staff access to Curtin’s academic staff resources and infrastructure in the areas of multimedia, exercise science, sports medicine and, later on, other disciplines.

The Club will also be working with Curtin to undertake specific research in areas that will benefit both parties and, importantly, provide the club with access to cutting edge research outcomes.

Welcoming the alliance, Fremantle Chief Executive Steve Rosich added “it is very much a two-way street, with significant benefits to both Curtin University and the Fremantle Dockers.

“The ability of the club to provide ‘real world’ experience for Curtin students and for our players and staff to benefit from the university’s academic expertise and research capabilities exemplifies that.

“The aligning of highly regarded tertiary institution with an elite sporting organisation also creates an environment for Fremantle to make an ongoing and significant contribution to the community by providing genuine employment opportunities for Curtin University graduates.”

Images: Curtin University Vice-Chancellor Professor Deborah Terry and Steve Roach sign the agreement (top) and the aquatic, recreation and sport facility that will serve as the future home of the Fremantle Dockers Football Club (below).