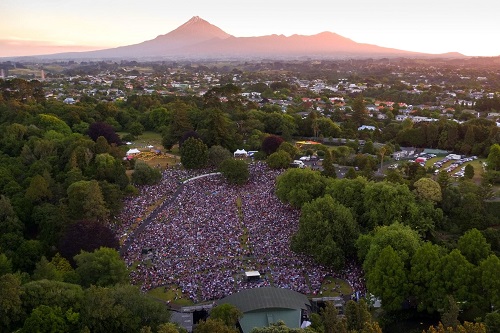 An army of Zero Waste warriors and a great response from concert-goers helped New Plymouth District Council keep 95% of waste out of landfill after a recent concert at city’s TSB Bowl of Brooklands.

With a crowd of 8,500 seeing Toto, Jefferson Starship and Dragon rock the Bowl for the A Summer’s Day Live gig in the middle of last month, as part of the Toitopu Toiora Taranaki Green Initiative, new recycling and waste stations were rolled out across the Bowl and volunteers were on hand to help concert-goers go green.

After the post event clean up, just six wheelie bins of rubbish had to go to landfill with the rest of the 35 cubic metres of waste either recycled or composted.

New Plymouth District Council (NPDC) Chief Operating Officer Kelvin Wright explained “to keep 95% of waste out of the landfill is an amazing result.

“We’d like to thank the army of volunteers who did an awesome job on the night and the next day. It’s this kind of can-do attitude which will help our journey to Zero Waste 2040.”

Volunteers included members of Taranaki Conservationists and Pare Kore who worked late into Friday night and the next morning to pick up any waste concert-goers left behind.

As well as the new recycling and waste stations, it’s estimated that up to 5,500 single-use cups were kept out of landfill by the use of NZ-made Globelets. Food vendors also switched to compostable materials.

The Toitopu Toiora Taranaki Green Initiative will feature at other Bowl concerts such as The Hollies on 1st March and Angus and Julia Stone on 31st March and will soon be available for hire at other community events.

For more information or to volunteer at future events, email: npeventvenues@npdc.govt.nz