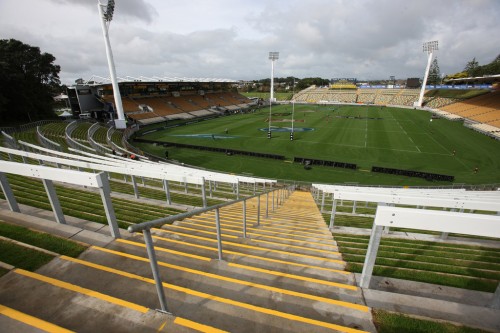 The main stand at New Plymouth’s Yarrow Stadium has been closed after a report highlighted a number of concerns regarding earthquake safety.

The New Plymouth District Council (NPDC) has this week confirmed it had received a report from an independent engineering company looking after the venue, stating that the stand, which is known as the TSB Stand under a naming rights deal, requires strengthening work to help protect it against earthquakes.

According to the Stuff.co.nz website, the stand, which also houses the Taranaki Rugby Football Union’s (TRFU) headquarters and a catering company, has now been vacated so that further assessment of the structure can take place.

TRFU Chief Executive Michael Collins said that he expects to stadium to continue to host events without the use of the main stand, commenting “this development is very new and preliminary, so there is still a lot of assessment to be done to confirm what work is required.

“The safety of Taranaki Rugby staff and our members, fans and corporate partners is paramount, so we fully support the decision to vacate the TSB Stand as a precautionary measure. We are currently working through the options for relocation of our business, including 20 staff and equipment, from our East Stand offices.

“We have a very good working relationship with the council and will support them in whatever decisions are necessary regarding remedial work on the stand.”

Collins also said the venue will remain open with a reduced capacity of 18,000.

Image: Yarrow Stadium, with the TSB Stand at left.