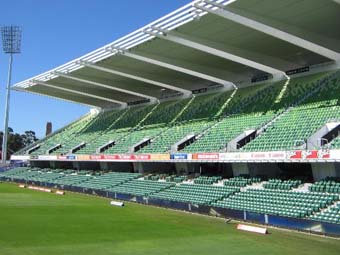 VenuesWest has taken on the operation of Perth’s rectangular stadium, the nib Stadium – replacing Allia Venue Management, who terminated their contract to management the venue in April.

Announcing the new management regime, VenuesWest Chairman Graham Partridge OAM stated “over the last five months, VenuesWest has been working to find a highly skilled management team to operate the Stadium and continue its success in delivering great customer experiences for many years to come.

“It has been a smooth transition with the fulltime employment of nine positions including the appointment of General Manager Peter Bauchop, who brings with him over 17 years of venue management experience and extensive knowledge of the both nib Stadium and VenuesWest.”

Perth Glory and the Western Force Rugby Club have both confirmed they will be signing up for another season as tenants at the venue.

Welcoming this, Partridge added “nib Stadium has been home to Perth Glory and the Western Force for many years and on behalf of VenuesWest we look forward to a fruitful season for both teams at Perth’s only purpose-built rectangular Stadium.

“We are proud to be both the owner and now operator of such a diverse and unique sports stadium, which caters for a number of Australia’s most popular sports.”

VenuesWest has governed the facility since 2012 on behalf of the Western Australian Government, and oversaw its 2012/13 upgrade.

The upgrade saw the Western Australian Government invest $95 million into the venue, increasing its seating capacity to 20,300.

Coinciding with taking on the operations of nib Stadium, VenuesWest will also be upgrading some of the food and beverage areas for fans as well as making some aesthetic improvements in regards to storage areas. The upgrades will also improve egress from the venues after large scale events.