All New Athletics Stadium for Perth 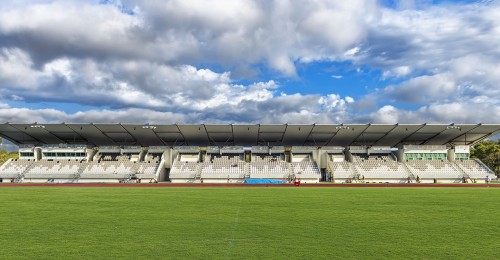 The all-new Western Australia Athletics Stadium is now in regular use by elite and junior athletes, local sporting groups, schools and spectators.

The world-class stadium at AK Reserve has been recognised as a high performance venue by Athletics Australia Set and is set to play host to the 88th Australian Athletics Championships and selection trials for the 2010 Commonwealth Games.

The $73.4 million stadium will also become the home training facility for some of the nation's top athletes as they count down to the 12th IAAF world championships in Berlin this August and the Commonwealth Games in New Delhi in October next year.

Speaking at the recent opening, WA Premier Colin Barnett explained that "the WA Athletics Stadium will provide our sportsmen and women with world-class conditions.

"It also pays tribute to Western Australia's past sporting greats with the naming of the Shirley Strickland Grandstand and the Herb Elliott Drive.

"Wally Foreman's contribution to sports media and dedication to the Western Australian Institute of Sport (WAIS) has been acknowledged with the naming of the Wally Foreman Walk."

• A 2,000 seat grandstand with capacity for a further 8,000 on grass banking;
• Duplicated event sites on the front and back straights (pole vault, long jump, triple jump, javelin, discus, shot put);
• Stadium and grandstand orientation to take advantage of the prevailing wind conditions;
• A Mondo track surface (as used at the Beijing Olympics) with twelve-lane front and back straights with nine lanes on the bends;
• Energy-efficient stadium lighting to allow twilight and evening training and events;
• A grassed internal arena that has been designed to accommodate soccer (i.e. stadium is multi-purpose);
• Energy and water saving devices and equipment such as waterless urinals, solar panels on the roof, flow controllers and timers on all taps. Recycled water from the Subiaco Waste Water Treatment Plant will be used for irrigation purposes with bore water used for flushing and back-up purposes as well as a huge supply of rainwater, harvested from the roof of the grandstand.

In addition to 19 rooms to be used for administration and events, the stadium will also house the Athletics Western Australia offices and a museum room of athletics memorabilia.

Leading the world in fixed seating solutions that transform stadiums and arenas into best class venues, Australian furniture manufacturer Sebel has completed the fit-out in the grandstand.

The company supplied 2,000 of its world renowned 'Viva' tip-up seats for the Stadium - along with a further 2,000 fixed and retractable seats for the adjacent basketball arena.

The Viva tip-up seat is made from 100% recyclable polypropylene and is fully UV treated to ensure maximum durability and weather resistance.