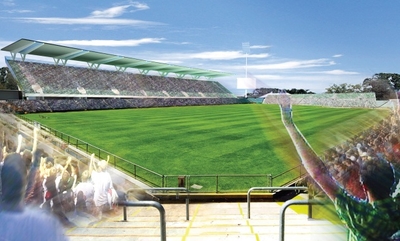 Construction of the new permanent Southern Stand at Perth's nib Stadium has been completed with the stand set to be fully open for this weekend's Perth Glory A-League fixture.

Western Australian Sport and Recreation Minister Terry Waldron said the opening of the Southern Stand was another milestone in the first stage of the stadium redevelopment, due for completion in March 2013.

Minister Waldron explained "I'm delighted that this part of the project has run ahead of schedule and it's a credit to the team at the Department of Sport and Recreation, Building Management and Works, BGC Construction and their employees.

"The new stand offers greater spectator comfort with better viewing and some of the best sightlines for rectangular sports in Australia. These will be on a par with Melbourne's Etihad Stadium."

The Southern Stand is part of many upgrades to the facility which includes the new Eastern Stand; heritage works at Gate 1; two big video screens (each of 110 metres2); the installation of CCTV; new corporate amenities; lighting; and a complete pitch replacement. While stadium capacity will now exceed 11,000, this is unlikely to placate Glory owner Tony Sage who claims that hosting A-League fixtures at the reduced capacity venue during its redevelopment is causing losses of $60,000 a game.

Sage has been in dispute with former Glory owner Nick Tana, whose company Allia Holdings manages the Stadium, over hiring costs for the venue.

Sage claims hiring costs have remained constant, in spite of the venue only having a capacity of under 10,000 during the early rounds of the A-League season.

Sage told The West Australian "we're being ripped off by being charged the same hire fee for a stadium which last year had a 22,000 capacity and now has a 9,800 capacity.

"Last year we needed to sell 12,500 seats to break even, the same is true this year but it's impossible with that lowered capacity."

As a result, Sage estimated the club would lose between $1.5 million and $1.7 million this season, of which $1.2 million would be hiring costs.

Tana disputes the figure with discussions involving both parties along with the Western Australian Government and Football Federation Australia having been held to resolve the dispute.

When the covered Eastern Stand is completed, nib Stadium will have a capacity of about 20,500. The venue will also have a new playing surface laid in mid-2013 after the Western Force Super Rugby season.

For more information go to www.nibstadium.com.au/

14th July 2010 - Perth Stadium to miss out on corporate facilties?