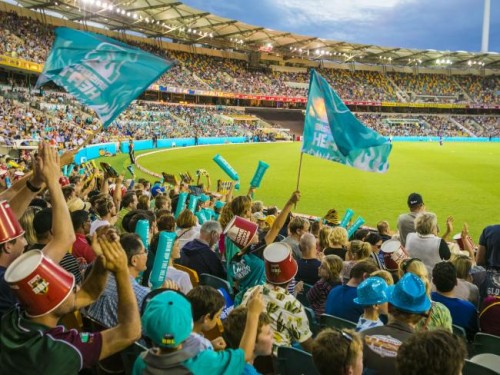 Official ticketing agency Ticketmaster is being accused of facilitating ticket scalping with seats to Friday night’s sold-out Big Bash League match at Brisbane’s The Gabba being resold for three times as much.

Cricket authorities today warned fans about scalpers targeting the booming BBL after complaints were levelled at Ticketmaster for allegedly unfairly cashing in on the competition’s popularity.

Fans looking for tickets to the table-topping Brisbane Heat’s opening home match against the Hobart Hurricanes, announced as a sell-out on this morning (Thursday 29th December), were shocked to see limited tickets advertised at exorbitant prices on the agency’s website.

Adult grandstand seats at the Gabba, originally sold for $40, were offered for $113.85 (excluding delivery fees) through a section on Ticketmaster’s website called Ticketmaster Resale.

Under Queensland’s anti-scalping laws, tickets to events Stadiums Queensland venues can only be resold at a maximum 10% above their original price.

Another Stadiums Queensland venue, Suncorp Stadium, warns on the home page of its website it has no obligation to honour tickets purchased from or through unauthorised third-party resellers such as Ticketmaster Resale, Viagogo and eBay.

A Queensland Government spokesperson told AAP that accusations of scalping are a matter for the Queensland Police, and public complaints could also be investigated by the Queensland Office of Fair Trading.

The ticketing drama came as a surprise to Queensland Cricket, which was aware resold tickets could not be passed on for more than 10% their initial price.

Cricket Australia this season issued a warning about third-party ticket scalping, one which Queensland Cricket reiterated this afternoon.

A spokesman advised “only buy your tickets from an official ticketing agency and be wary of ticket resellers.”

Where things become unclear is due to Ticketmaster being the official agency for the Gabba, with tickets being sold via its increasibly controversial Ticketmaster Resale website.

Ticketmaster Resale was also accused of ripping off fans in March when tickets to a regular season AFL match between West Coast and Collingwood in May were sold out within 10 minutes and seats were resold at $142 through Ticketmaster Resale.

Ticketmaster said it proactively set up a dedicated site to for Stadiums Queensland events, and Ticketmaster Resale provided a platform for fans to sell unwanted tickets and a safe purchase option for events.

A Ticketmaster spokesperson explained “ticketing marketplaces are dynamic and react to demand.

“With high-profile events such as BBL at the Gabba, tickets are sometimes listed at prices higher than the face value, but they will often be listed at or below face value as well.

“Ticket holders, not Ticketmaster Resale, control the inventory and the price of the tickets.”

Just before Christmas, US President Barack Obama signed the Better Online Ticket Sales (BOTS) Act of 2016 into legislation, a law that makes it illegal to use software to purchase tickets to concerts and other events.

The bill had been passed by the US Senate and House of Representatives with bipartisan support.

The BOTS Act of 2016 defines the use of automated ticket purchasing software as an "unfair and deceptive practice" under the Federal Trade Commission Act and allows the FTC to pursue those cases. The bill also prohibit the sale of or offers to sell an event ticket in interstate commerce obtained through the circumvention of systems designed to limit purchases.

Rod Pilbeam, Executive Director of AEG Ogden and Executive Councillor of Live Performance Australia (LPA), shared his views on why it’s time to crack down on resale scalpers in a feature in the November/December 2016 issue of Australasian Leisure Management.