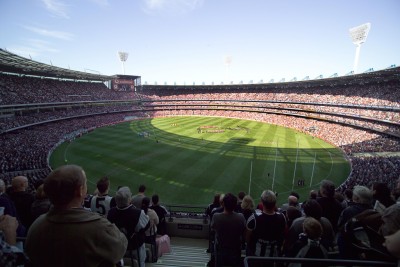 Scalpers selling 2013 AFL Grand Final tickets could face fines of thousands of dollars according to Victorian Minister for Sport and Recreation Hugh Delahunty.

Minister Delahunty joined Superindendent Peter O'Neill of Victoria Police and the AFL's Chief Operating Officer Gillon McLachlan and Assistant Commissioner Robert Hill and Superindendent Peter O'Neill of Victoria Police to reiterate the message to ticket scalpers and reaffirm new penalties in the lead up to the 2013 AFL Grand Final.

Minister Delahunty stated "ticket scalping is an issue that the Victorian Coalition Government takes very seriously, and with the 2013 AFL Grand Final only days away, it is timely that we remind would-be ticket scalpers that this will not be tolerated.

"For the first time, police will be issuing on-the-spot fines of $721 for unauthorised on-selling or advertising for resale of up to five or less tickets to protected events at a price above face value.

"Also, anyone thinking of advertising tickets at a price above face value can think again there is also legislation in place to stamp out this activity.

"The Coalition Government is sending a very clear message ticket scalping for the 2013 AFL Grand Final will not be tolerated."

Key penalties for ticket scalping include:

• On-the-spot fines of $721 for unauthorised on-selling or advertising of five or fewer tickets at a price above face value;

Minister Delahunty said these laws help make events more accessible and fairer for patrons, concluding "ticket scalping prices the average supporter out of the market and reduces their opportunity to attend one of the most eagerly anticipated sporting events of the year.

"It's not just ticket scalpers that we'll be monitoring people attempting to buy tickets from scalpers need to know that their tickets can be cancelled by the AFL and their money will not be refunded."

The Victorian Government will work with the AFL, Victoria Police and websites such as eBay and Gumtree to monitor ticket scalping activity in the lead up to the Grand Final.