The IOC, IPC and IAKS award international prizes for recreation and sport architecture 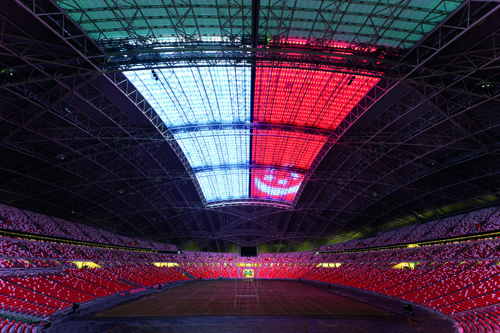 Along with three other international projects, the design by Arup Associates received a Gold Medal, the top award, at the presentation ceremony on 7th November.

Presented during the 25th International Association for Sports and Leisure Facilities (IAKS) Congress, the biennial awards are the most important international architecture prizes for aquatic, recreation and sport facilities. Commending facilities of exemplary design and function, together with the International Paralympic Committee, IAKS also awards the IPC IAKS Distinction for facilities suitable for persons with a disability.

Composed of international personalities, the jury for the 2017 IOC IAKS Award is commending four facilities with Gold, seven with Silver and five with Bronze. The IPC IAKS Distinction for accessible sports facilities is going to six participants. The prize-winning projects can be found in 12 countries worldwide.

High interest in the Architecture Award for Students and Young Professionals
The IOC, IPC and IAKS also presented, for the fourth time, the Architecture and Design Award for Students and Young Professionals for innovative designs and strategies for aquatic, recreation and sport facilities. The competition is targeted at young architects, landscape architects and designers who are still studying or in the first two years of their careers.

This prize attracted over 30 young planners and designers from 14 countries with the jury awarding the Gold medal to Russia and both the Silver medal and the Bronze medal are being awarded to project teams from Italy.

Entitled to enter the 2017 competition were newly built facilities as well as extensions, modernisations, rehabilitations or conversions of existing buildings and facilities that had been erected and gone into operation between 1st January 2010 and 31st March 2016 and must have been in successful operation for at least one year. Temporary venue infrastructure/architecture (including demountable or relocatable infrastructure for major sport events) were also eligible to be entered in the competition.

Videos of the awarded project can be seen at www.youtube.com/user/IAKSeV1965/videos

Click here for more information on the IOC, IPC and IAKS architecture award.