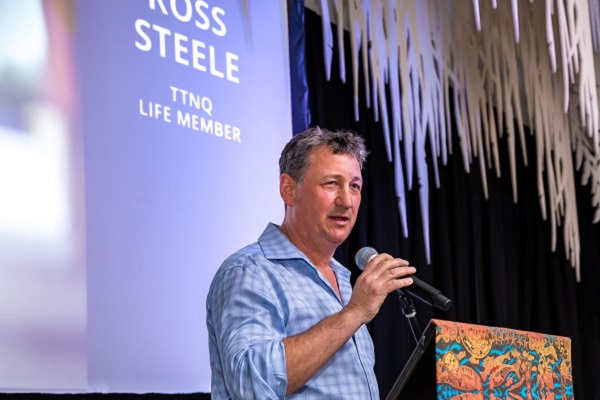 Te Pae Christchurch Convention Centre General Manager Ross Steele has been recognised as a Life Member of Tropical Tourism North Queensland - the organisation’s highest honour - reflecting his contribution to tourism during his time in the region.

Awarded at a gala event at the Tjapukai Aboriginal Cultural Park in Cairns last Friday evening the TTNQ Industry Excellence Awards celebrate achievements and successes within the local tourism industry.

Steele was appointed earlier this year to lead the team running the purpose-designed Te Pae Christchurch Convention Centre, following 12 years as General Manager of the Cairns Convention Centre. Opening in just 12 months, the new venue is designed to be a catalyst for the city’s regeneration.

“We’ve started to build a fantastic Christchurch-based team, with a real depth of local and international experience.”

“Our focus on people who not only understand the unique dynamics of the conference and events sector but also embody the warm, welcoming culture we are creating is absolutely vital if we are going to achieve our aim of establishing Te Pae Christchurch as a leading, world class venue.”

Te Pae Christchurch will employ around 200 staff, to establish a pipeline of local and international conferences, manage events and deliver the full range of the centre’s requirements – from AV to catering.

Steele said he was humbled to receive the recognition of the industry through the Life Member award, and proud that with the Cairns Convention Centre team he had brought many great events to the region – not to mention two World’s Best Congress Centre awards.

He added “it is not an exaggeration to say I share this award with hundreds of extremely talented people – in particular my colleagues at ASM Global and the many conference and event organisers who we worked with over many years to make the Cairns Convention Centre such a success.

“What makes the award very special to me now, is it has provided the opportunity to connect with the Australasian industry in a new way, and to reinforce the unique benefits of the South Island, Christchurch and Te Pae Christchurch Convention Centre when they consider developing their next event.”