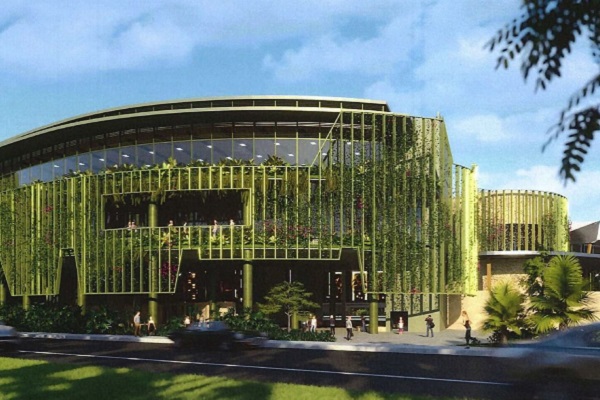 The Queensland Government has released new drawings of plans for the upgraded Cairns Convention Centre, showing a tropical-themed entrance and Sky Terrace with views of Trinity Inlet.

Announcing a larger than originally planned expansion of the venue, Queensland Premier Annastacia Palaszczuk today announced “we only get one chance to do this so we’re going to do it right.”

570 jobs are expected to be created when the work begins in May next year.

The revised plan includes a new entry, space for 30 exhibitors’ booths, three meeting rooms over 420 metre², a flat floor space for 450 people and a rooftop banqueting space for 410 people.

The original design, which wouldn’t have allowed for concurrent events to occur, was dumped after intervention from local stakeholders.

Local state member Michael Healy commented “the Convention Centre is an engine room for the Cairns economy and as far as I am concerned the bigger the engine the better.

“It will also compliment the Global Tourism Hub to further generate more for our region.”

A full business case is yet to be completed and the new timeline has pushed back the completion date to early 2020.

The facility will be closed between May and October next year to allow the majority of internal construction to occur.