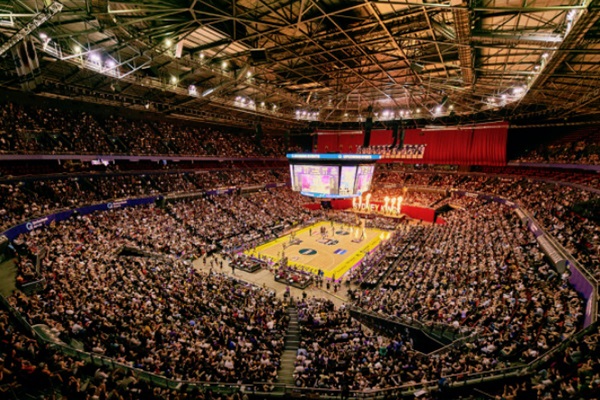 The Sydney Kings have completed a unique and successful season that has laid foundations on and off the court that will see the club a long-term sustainable force in the NBL.

Having secured Andrew Bogut in April, his presence made a major contribution to an unprecedented growth across ticket sales, membership, sponsorship and merchandise.

Subsequent interest in the Kings across the League drove increases in crowd attendance for a majority of the teams games with other NBL Clubs also achieving records as a result.

For the Kings, it was a season of memorable moments. From Bogut’s arrival, to David Wear’s three-point winner in Perth and Sydney’s streak-busting victory over Melbourne United, the Club’s first Indigenous Round game - there were many points in NBL19 to be celebrated by fans of the purple and gold.

The final result, being beaten by Melbourne United in the semi-final series, meant the teams stated goal was not achieved, however, those who follow basketball in Australia saw the improvement in team’s performance that led to the Kings finishing the regular season on an equal number of wins to Melbourne and the Perth Wildcats.

Some of the Club highlights from the 2018/19 season include:

• The number of tickets sold increased by 92% from 2017/18
• Sydney Kings membership saw an increase of 40% compared to the 2017/18 season
• Average attendance at Qudos Bank Arena increased by greater than 2,500 per game from the 2017/18 season (6,320 to 8,932).
• Attracted the two biggest standalone home crowds in franchise history, the first - 14,569 - for their Semi Final game against Melbourne United at Qudos Bank Arena which beat an earlier record set on December 23 of 12,050 in Round 10 also against Melbourne United.
• For the first time ever in franchise history the Kings attracted more than 100,000 fans through their doors (119,404 fans for the regular season in 2018/19).
• For the first time ever in franchise history the Kings surpassed more than 200,000 spectators in a regular season (totalling 216,063) to watch them at home and away venues. This included record crowds in Perth, Brisbane, Melbourne, Wollongong and New Zealand.
• The Kings attracted the third largest road crowd in franchise history – 13,520 – when they played the Perth Wildcats at RAC Arena 10/02/19. The 13,520 is also the fourth largest crowd overall ever to see a Sydney Kings game.
• Merchandise sales increased 50.2% from the 2017/18 season
• The Club attracted 12 new sponsors for the 2018/19 season and beyond
• The Club increased its corporate commercial revenue by more than $1 million since last season
• The Kings dramatically increased their media coverage across NSW, Australia and internationally

Acknowledging the progress the team had made this year, Sydney Kings Chief Executive Paul Kind advised “I was fortunate to become an owner and interim CEO of the Sydney Kings at the start of what has been a very memorable season.

“Acquiring a player and person the calibre of Andrew Bogut was a major moment for the Club and Andrew exceeded out incredibly high expectations. He has transformed the NBL since his arrival and we can see enormous opportunity ahead working with Andrew to build the Sydney Kings.

“We set aggressive targets for this Club to be successful off the court, but you can’t do that without success on the court and a player group who understand their responsibilities to engage and entertain our fans.” I want to commend our players for everything they contributed on and off the court – we know they loved the support they received from members and fans throughout the year.”

“We committed to deliver a world class entertainment experience at home games and combined with a winning team we saw record crowds, membership & corporate sales , results that are a foundation to drive further growth. We want fans sports fans across Sydney and NSW to support the team and find a way to engage because we know anyone who experiences a Kings game comes back again."