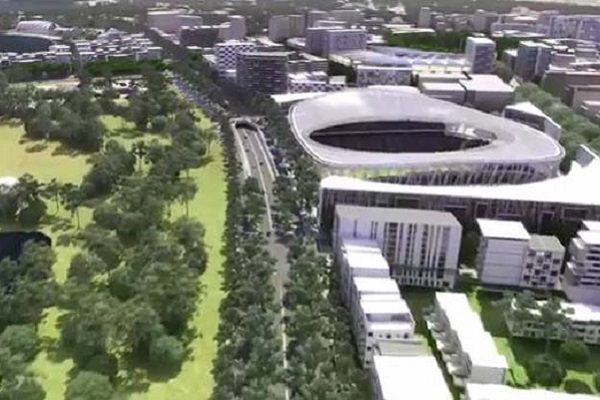 Replacing the ageing Canberra Olympic Pool with a purpose-built stadium as the future home for the Brumbies and Raiders appears to be part of ACT Government’s long-term infrastructure plans, with both major political parties agreed that the location remained their preferred option prior to the recent the Territory’s recent election.

ACT Chief Minister Andrew Barr said a feasibility study to explore a location in the city and the Exhibition Park site found both locations to be live options, but that the more centrally located Canberra Olympic Pool site remained his preference.

Warning that that a stadium in Exhibition Park risked resembling Sydney Olympic Park unless significant investments were made in the area to make it more active, The Canberra Times has reported Chief Minister Barr as saying “by and large, the Exhibition Park (site) has a lot of land that would be feasible as an event location (and) it doesn’t have the location restrictions that the city location has … but you can still build a stadium in the city.”

Liberal Leader Alastair Coe also stated “if we are to have a new stadium, the Civic (Canberra Olympic Pool) site is the best location, although it poses some problems.”

Logistical challenges for a rectangular stadium on the Canberra Olympic Pool - a possible future home for the Brumbies, Raiders and a possible Canberra A-League team - include the existing site being too small for a so-called boutique stadium with 25,000 seats, which means that the government would require a realignment of an adjacent road (Parkes Way) or a two-lane road tunnel under the development site.

In contrast to Exhibition Park or the city’s current GIO Stadium, the pitch at a stadium on the Canberra Olympic Pool site would have to run in an east-west direction, which is not ideal for the cultivation and maintenance of natural grass, as it concentrates the intense heat on the field.

In one of its pre-election pledges, Labor promised a new indoor venue at Exhibition Park that, in times without a pandemic, would accommodate around 1,500 people for standing community events.

Image: Architect's concept for a new stadium on the site of the Canberra Olympic Pool.