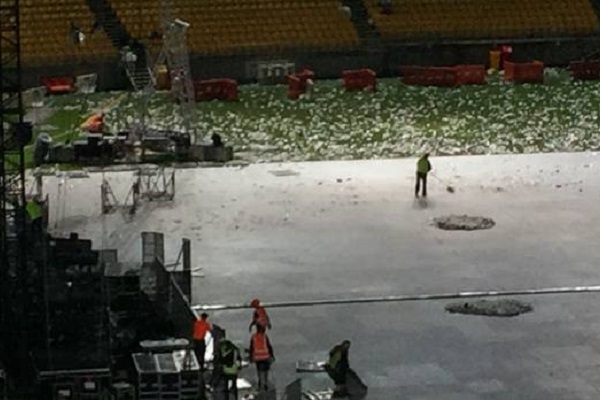 Eminem’s record breaking concert at Wellington’s Westpac Stadium on Saturday has led to debate about the waste left behind by the 46,000 attendees.

Concert attendee Peter Steele was shocked by the "sea of plastic" left behind after the event and a photograph he took of the massive numbers of discarded PET plastic cups has generated considerable debate.

He wrote "I just saw a sea of plastic, it looked like it had hailed.

"The conversation just started with 'what a mess, what pigs, where do they go, that's appalling.'"

Steele contrasted initiatives to end plastic bags at supermarkets with the waste left in the venue, estimating there would have been at least 100,000 cups.

He and his friends discussed music festival Coastella, and how attendees had been able to purchase a $3 cup which they used throughout the festival and were able to return for a refund at the end.

Advising that the amount of rubbish collected by the post-event cleaning crew was standard for a concert of this size, a Westpac Stadium spokesperson advised “aAll rubbish was cleared on the night of the concert. All waste is collected and sorted by our post event clean-up crew and plastic and other recyclable products are sent for recycling locally."

Organisers have already put in place processes to reduce waste, and are looking for other alternative sustainable solutions.

Changes include serving all food in non-plastic, recyclable containers, recycling all bottles and cans after pouring beers, RTDs and wine, and recycling all cardboard packaging.

There are no straws provided in the venue and it no longer provides plastic lids with beers.

Scenes such as those reported at Westpac Stadium occur every weekend at sports events, festivals and concerts where PET single-use cups are used, with all this rubbish going to landfill.

It has been estimated that a single major stadium in Australia sends 1.3 million single-use cups to landfill every year.

Estimates suggest that AFL venues alone use over 12 million PET cups every year while rock concerts, music festivals, NRL, Formula One and the Australian Open Tennis add to the total.

With society becoming increasingly aware and conscious of pollutants such as plastic ending up in the sea, rivers and waterways, Australasian Leisure Management is aware of industry moves that will see positive action at the source to reduce sport event, festival and concert waste:

Image: Peter Steele’s image of what he estimated as the 100,000 cups left behind Eminem’s concert at Wellington’s Westpac Stadium.