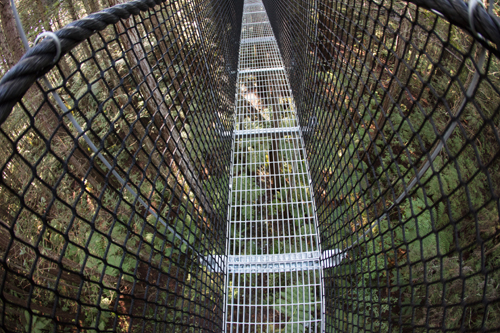 Coinciding with the announcement that Redwoods Treewalk is a finalist in the 2018 NZ Tourism Awards, the new Highwalk provides a birds-eye point of view of the enchanted Redwood forest, including the magnificent silver ferns, tree ferns and younger redwood trees.

Redwoods Treewalk Director, Bruce Thomasen says the new feature is targeted at those who want a ‘little more thrill’ and vertical height, commenting “ranging from 12 to 20 metres above the ground, the new 100-metre long Highwalk is accessed via a suspended staircase, which means visitors are elevated into the canopy of the Redwood giants for a truly otherworldly experience.”

Explaining that the addition is just another reason to visit the attraction, which has quickly made ‘must-do’ lists around the world, Thomasen added “the experience is very different from the original Treewalk, which features timber bridge sections. The highwalk is included at no extra charge within the Treewalk experience itself.

“We say daytime for nature, night time for magic and the new Highwalk adds a whole new dimension to that experience.”

He concluded “we are proud to be contributing to unique offerings in Rotorua and will continue to look at ways we can create added value for visitors.”

The Redwoods Treewalk opened in December 2015, with the Redwood Nightlights opening one year later, featuring award-winning lanterns by David Trubridge.

The new Highwalk compliments the over half a kilometre of suspended bridges and platforms and is included as an optional loop on the existing Treewalk route.