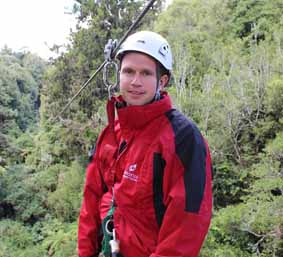 James Fitzgerald, a Rotorua entrepreneur who spotted an opportunity and went on to create his thriving eco-tourism business, despite the naysayers, has won the 2014 PATA New Zealand Trust Young Tourism Leader Award.

Fitzgerald, who is Managing Director of Rotorua Canopy Tours, New Zealand’s only native forest zipline canopy tour, explained “I spotted the zipline trend emerging overseas in 2008 and realised it was perfect for New Zealand as it could showcase our native forest and the magic of our natural environment.”

He embarked on a four-year journey, taking the concept to build one of the best zipline canopy tours in the world from an idea to a successful commercial business, opening for business in August 2012.

As he recalls “there was no business model to follow, no experts available in New Zealand and everybody telling me that there was no market for this type of product to make a return.”

Two years on and the business has hosted 30,000 visitors, around 55% from overseas, and employs 20 staff.

Fitzgerald says an aggressive marketing strategy and ambitious conservation programme have helped the business achieve some incredible results, including being ranked number one activity on TripAdvisor in the North Island and Rotorua.

Coughlan stated “having been involved in these awards for more than ten years, I can say that this was by far the best line up of talent that we have ever seen and Jamie should feel a huge sense of achievement.

“Over the past two years he has demonstrated real entrepreneurial acumen. He saw a gap in the market and has created an economically and environmentally sustainable business, creating jobs and a new attraction for the Rotorua region.”

Roberts stated “James is a fantastic role model – a young leader who has created a new, successful business. He is also very engaged with the wider tourism industry, working with others to help create a more vibrant, valuable tourism industry.”