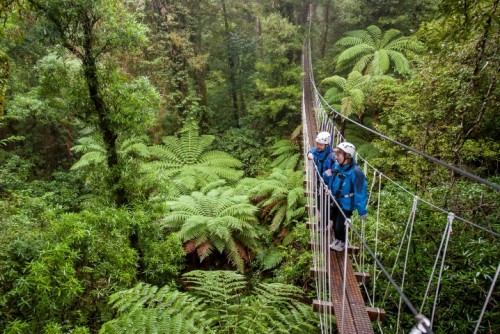 Two Rotorua tourism attractions are to benefit from more than $1.4 million in New Government funding.

Skyfly, which runs Rotorua Canopy Tours, has been given $810,000 for a new 3 kilometre long guided zipline canopy tour experience through native forest, while also offering night time tours for star-gazing.

Rainbow Springs Kiwi Encounter has been given $630,325 for a new state-of-the-art, all weather, all seasons kiwi facility.

Both grants come from the Government's Tourism Growth Partnership funding.

Rotorua Canopy Tours co-owner James Fitzgerald said the funding had "challenged us to push the envelope", stating “it has really challenged us to step outside our comfort zone and look at innovative ways to expand and be an example not just in Rotorua but worldwide.

"We will be chipping in more on top of the funding we have received but the project will do wonders for Rotorua and create lots of jobs."

Fitzgerald said the details of the project were still confidential but confirmed they were looking at "multiple sites around the district".

Hall explained “this world class interactive experience will be the first in New Zealand to showcase all aspects of the kiwi life cycle and conservation story, enabling visitors to get up close to and connect with our national bird."

Rainbow Springs first became involved with kiwi conservation in 1975. It is now the leading kiwi hatchery in New Zealand and has hatched more than 1500 eggs at its Kiwi Encounter facility.