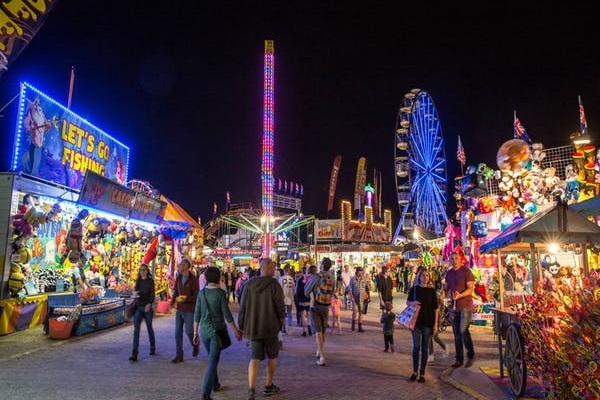 The public liability insurance crisis and the impact it is having on amusement operators and recreational businesses across the country came to a head at the Townsville Show at the end of last week with members of Katter's Australian Party and the Showmen's Guild of Australasia warning of the potential death of the country show without immediate changes to the insurance sector.

Speaking at the Townsville Show last Friday alongside members of the Showmen's Guild, Katter's Australian Party (KAP) leader and Member for Traeger, Robbie Katter called for a parliamentary inquiry into the public liability insurance sector, claiming the sector was at risk of approaching market failure.

Calling for immediate intervention by Queensland and Federal Governments, Katter said the sector needed a sustainable solution to the matter, commenting "we have known for some time that the public liability insurance sector in Australia was becoming a basket case, but this issue has truly reached breaking point now

"Show societies themselves are facing some difficultly in accessing insurance, and when they do, the trade-off is exorbitant premium rises, which I understand in Queensland were more than 7.5% in the last financial year.

"However, it's our amusement and recreational operators who are the most at risk - from our discussions with the industry, most don't expect to operate after about October this year.

"They simply cannot find anyone to insure them and legislation dictates that they cannot operate without it.

“It’s an unacceptable state of affairs - not only are people’s livelihoods going to be wiped out but so is this much-loved traditional event that all Aussies love, and particularly so in rural and regional towns where it is often considered the event of the year.” 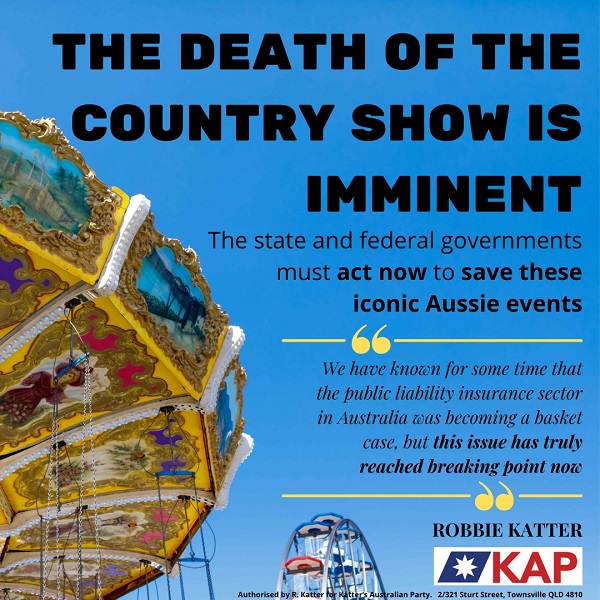 Showmen's Guild Treasurer, Leann Allan said it was a real crisis for the industry, with more operators losing their insurance every week

Allan told the Queensland Register “there are just no insurers in the market that are willing to cover up to the $20 million level that is required by the capital shows.”

Allen said if things don't change soon there won't be any rides at shows in Queensland from February next year, adding "it's terrifiying; our multi-million dollar rides will just become scrap metal.

"I would like to see consideration given for the level of cover to be dropped from $20 million to the $5 million that is available from insurers."

KAP Member for Hinchinbrook, Nick Dametto said the event would not be sustainable without amusement attractions drawing people through the gates, noting “our shows just won't survive without the show runners.

"The most difficult part of this problem is that most of these operators who are being forced out of business have rarely, if ever, had to make a public liability insurance claim.

"They have paid their levies each year, run their businesses safely and successfully, and they are still going to be punished.

“We have already seen victims of this market failure in North Queensland, including tourism operators across the Townsville region affected and the Barra Fun Park that has been forced to close down.

“How are we meant to keep kids of the street and offer up families in the North an enjoyable way of life, when we cannot even provide a regulatory environment that enables these recreational businesses to operate?” 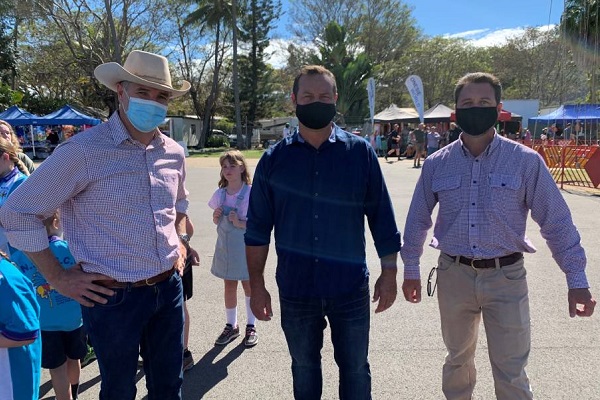 In a lengthy Facebook post, Katter has suggested a New Zealand-style national insurer, loans to operators to develop their own mutual funds and an immediate halving of Queensland’s minimum insurance amounts have been floated by KAP as solutions to the nation’s public liability insurance crisis.

He also said that in the short-term the Queensland Government could reduce the amount of public liability insurance required for show ride and amusement operators, from $20 million down to $10 million - bringing it in line with most other states.

However, Katter believes that ultimately, the Federal Government needs to intervene in the sector to find a sustainable solution.

The KAP is now calling for a parliamentary inquiry, followed by immediate intervention, into the public liability insurance sector in Australia.

Demanding action, Katter added “the worst, but very likely, case scenario here is that this year’s shows will be the last of their kind.

“There is no use putting our head in the sand to only wake up next year and half of our events and numerous tourist operations are dead - we need State and Federal Governments to act now.”