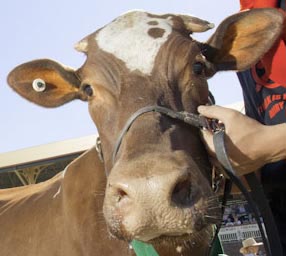 Princess Anne, the Princess Royal has praised the role of agricultural shows in Australia this week while attending the 26th Royal Agricultural Society of the Commonwealth (RASC) Conference at the Brisbane Showgrounds.

Greeting 230 show society delegates from around the world at the event in her role as RASC President, Princess Anne praised Queensland "as one of the greatest primary producing areas in the world.”

While the conference traditionally has an agricultural focus, this year’s event, hosted by the Royal National Agricultural and Industrial Association of Queensland and being held from 21st to 24th October, has broadened its the spectrum with the introduction of three streams of speakers – agriculture, strategy and the operational – based on feedback from the last meeting held in Zambia in 2012.

The Princess Royal praised Australia’s more than 600 agricultural show societies as “institutions” for attracting almost a quarter of the national population to attend a show each year, stating "the tradition of the agricultural shows form a particularly rich part of Australia’s cultural and social heritage."

The Princess Royal suggested visiting delegates may aspire to match Australia’s success, adding “the shows, wherever they are, (are) widely anticipated and are often the single largest, regular annual event in its community.”

Princess Anne is the third royal to visit the home of Brisbane's Ekka, after King Edward VIII’s visit in 1920 (prior to his brief ascendancy to the throne), and Queen Elizabeth II trip after her Royal Coronation in 1954.