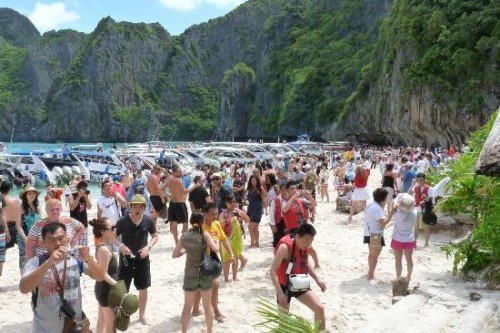 Tourism officials in Thailand have advised that Maya Bay, location for the Leonardo DiCaprio movie The Beach, is to be closed indefinitely to allow it to recover from the damage caused by millions of tourists.

Thai authorities have announced that a temporary four-month closure introduced from 1st June will now be extend to at least a year, due to the extent of the destruction caused by the thousands of day-trippers to the iconic location.

The golden sands and crystal blue water of Maya Bay, ringed by cliffs on Ko Phi Phi Leh island, has become one of Thailand’s most-visited tourist destinations since it shot to fame as the movie’s location.

However, the small beach has sustained extensive environmental damage in recent years, receiving up to 5,000 tourists and 200 boats a day.

As a result of pollution from litter, boats and sun cream, it is estimated that more than 80% of the coral around Maya Bay has been destroyed. 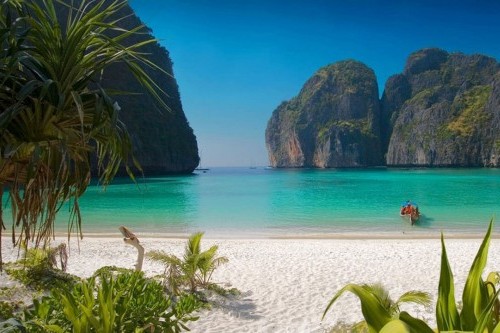 Songtam Suksawang, Director of Thailand’s National Parks Department, advised “we have evaluated each month and found out that the ecological system was seriously destroyed from tourism of up to 5,000 people daily.

“It’s very difficult to remedy and rehabilitate because its beach was completely destroyed as well the plants which cover it,” he said, adding that it was “impossible” for recovery to occur in the allotted time.

Despite evidence of the mounting damage to Maya Bay, for years, Thai authorities had been reluctant to shut it, because the location generates about 400 million baht (US$12 million) in revenue a year.

However, a Royal Gazette published on 1st October by the National Parks Department announced the restrictions on tourism would not be lifted until the ecosystem “fully recovers to a normal situation”.

With coral only growing at a rate of about half a centimetre a year, environmental groups expect that Maya Bay’s reef will take years to be fully restored.

As reported by the Guardian Australia, countries across the region from the Philippines to Indonesia are waking up to the problems that can be caused by excessive tourism.

In April, the Philippines President, Rodrigo Duterte, announced a six-month closure of the Boracay beach resort, calling the destination a “cesspool”.

Indonesia declared a ‘garbage emergency’ last year along a stretch of the island of Bali, after coastal pollution was highlighted in a viral video that showed a diver swimming through water full of rubbish.

Images: Overtourism at Maya Bay (top) and the Bay without visitors (below). Courtesy of TripAdvisor.