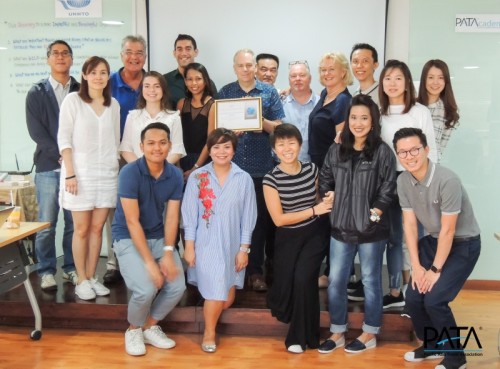 The Bangkok headquarters of the Pacific Asia Travel Association (PATA) has retained its EarthCheck Silver-level Sustainability Certification for a second consecutive year.

The PATA head office team worked with guidance from EarthCheck - the leading scientific benchmarking, certification and advisory group for the tourism industry - in the collection and collation of relevant operational data on daily practices in order to be benchmarked against EarthCheck’s global sustainability standard.

The PATA head office received Bronze Benchmarked Sustainability Certification in 2015 and the Silver Certification was first awarded during the Association’s Annual Summit in Guam in May 2016. The EarthCheck benchmarking data embraces water and energy consumption, waste management, community contributions/activities and risk management as well as the use of paper and cleaning products.

“Year by year we are becoming more sustainable and environmentally friendly when we carry out our daily duties. I hope that our actions and achievements may continue to inspire our members to pursue sustainable and responsible business practices.”

EarthCheck Chief Executive and founder Stewart Moore acknowledged PATA’s important leadership in this space, commenting “PATA was the first administration office in Thailand to achieve this hard-earned and coveted recognition and is also the first to maintain this status.

“In doing so, PATA is encouraging its neighbours and peers to consider their social and environmental impacts that may, inevitably, provide economic and social benefits.”

EarthCheck Certified is built upon the belief that effective scientific benchmarking puts rigour and transparency into business processes, benefitting all stakeholders in the long term.

According to the program’s protocols, members must achieve Silver for five consecutive years before seeking Gold Status.

Dr Hardy concluded “PATA is committed to treading lightly on the planet and has, for many years, taken steps to reduce its environmental impact.

“The Association aims to inspire its members to act in the interests of society at large, protecting the very reason that we all love to travel.

“PATA encourages its stakeholders to promote its commitment to sustainability and social responsibility in the travel and tourism sector and in their daily lives.

“We must stretch our sustainability horizons in order to protect our planet for future generations.”