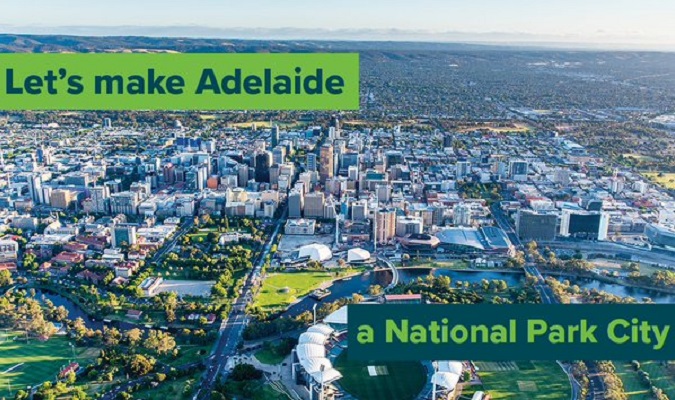 Adelaide National Park City is a new notion for South Australia, and it is about creating a more liveable metropolitan area that brings social, economic and environment benefits for all.

Advising that recognition as a National Park City would acknowledge Adelaide’s ‘liveability’, proximity to nature and the important role the environment has in the everyday lives of its population, South Australian Minister for Environment and Water, David Speirs stated “a National Park City is a focused community effort to improve a city’s liveability, through a better connection of nature and people.

“It’s a term borrowed from our friends in the UK, with London being coined the first National Park City in 2019. It’s a place where everyone enjoys the outdoors, walking or bike riding to work or school, and a place where being part of nature is a factor in everyone’s life, ultimately improving health and wellbeing.

“Greater London has nearly 50% green cover making it one of the world’s most vegetated cities. In South Australia, we have a significant agenda to green, cool and open up our capital city for more biodiversity, recreation and interaction with nature.

“We have a strong history of parks and open spaces with our Botanic Gardens, Cleland Wildlife Park, Belair National Park and the recent creation of Glenthorne National Park in Adelaide’s southern suburbs. Metropolitan Adelaide is also blessed to be nestled amongst local parks, the River Torrens and numerous creeks - most of which are within walking distance from homes.

“The (South Australian) … Government is investing record amounts in our parks to make these natural beauties more accessible for everyday South Australians and tourists alike.

Green Adelaide Chair Professor Chris Daniels said supporting an Adelaide National Park City is about people power to connect and look after the environment, adding “signing and sharing the Charter helps us gather and demonstrate support, a critical step in the process of becoming a National Park City

“There is lots of on-ground action everyone can do to support Adelaide National Park City, from greening your backyard, to caring for your local wetland and even by building eco-friendly houses that incorporate green walls and roofs.”

For more information go to www.adelaidenationalparkcity.org.