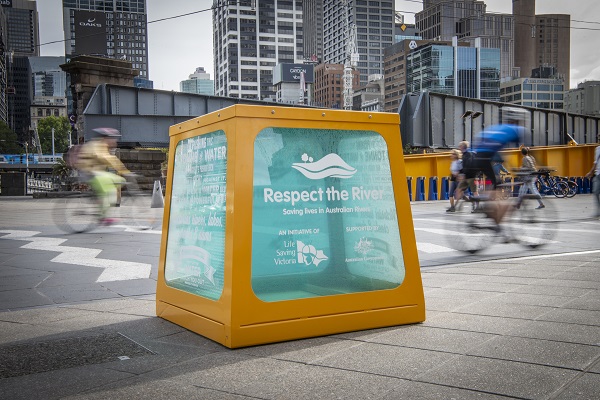 Life Saving Victoria is urging people to think about the hidden dangers of inland waterways during the Victorian school holidays and leading into the Easter public holiday weekend.

To highlight the dangers, a water tank filled with 1-tonne of water has been installed at Queensbridge on the banks of the Yarra River in the Melbourne CBD, with the challenge to try to move the tank - equal to fighting against a strong water current.

People associate danger with surf beaches where large waves and rip currents are more obvious, but it’s often difficult to see the hazards of inland waterways when the water is murky.

Explaining that the flat, still surface of an inland waterway can give a false sense of security, Dr Matthews stated “even in seemingly calm waterways there can be strong currents, fast-flowing water and submerged objects such as rocks and tree branches. If you get into trouble, there may be no one there to assist as many inland waterways are not patrolled by lifeguards.

“It’s also difficult to get out of the water due to slippery banks and uneven surfaces.”

The water tank installation has been in position all this week (Monday 8th to Friday 12th April), with LSV education staff on hand between 11am to 2pm each day to talk to the public about the dangers of inland waterways. Staff have also been available for photographs, and video footage with the tank at these times, while also being available for comment and interviews.

Dr Matthews advised “over 20% of the total drowning toll each year in Victoria is related to alcohol consumption.

“Alcohol consumption can cause a loss of balance, poor vision, slowed reaction time, and poor judgment which is a very dangerous combination around water.”

Dr Matthews concludes “in the majority of these cases, the victims were men aged in their 30s, 64% were from culturally and linguistically diverse communities.

“We hope the installation will highlight the danger.”