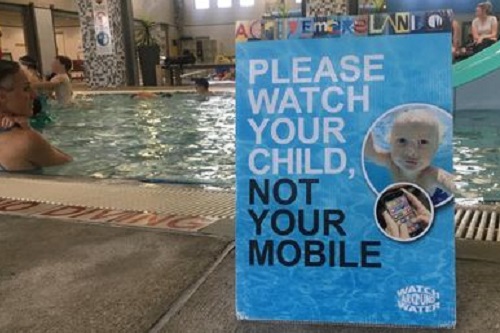 With large numbers of parents addicted to their mobile phones, Life Saving Victoria (LSV) is reminding them of the need to supervise their children when at swimming pools and to not be distracted.

Brunswick Baths is one of a number of Victorian aquatic centres erecting signs and posters with messages including 'Watch your child, not your mobile' due to rising drowning concerns.

Parents transfixed by their phones and oblivious to their children's attempts to show them a new swimming move are among scenes reported by pool users before the signs went up.

However, LSV says device distraction can be deadly, with lifeguards increasingly having to take care of children not being supervised by their parents.

The signs have been introduced as part of LSV's Watch Around Water strategy, aimed at reducing the number of fatal and non-fatal drownings and injuries in Victoria within the 0 to 14 year age group.

Some aquatic centres are also changing their passwords for public Wi-Fi to phrases like 'watchyourchild' to ram home the message. 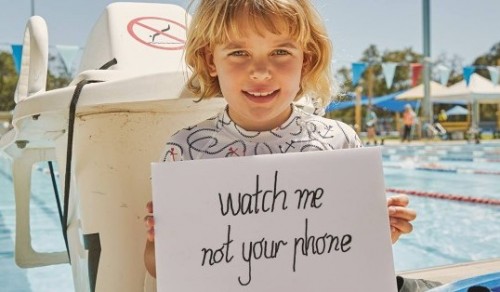 Advising that about 170 public pools have registered for the campaign in Victoria, LSV's General Manager of Public Training and Pool Safety, Andy Dennis stated "(the campaing) is intended to raise the profile of the need for parents to supervise their children rather than expect lifeguards to do that job.

"It started in Western Australia as there were too many instances of lifeguards having to rescue children who were not being properly supervised as mum and dad were on their phones.

"Unfortunately it's something that's very prevalent here as well. A lot of parents and guardians, if they look themselves in the mirror, have to acknowledge that they are on their phones rather than watching their kids in instances when they shouldn't be."

Dennis said lifeguards often had to monitor multiple pools and could not be relied upon to look after every child.

Watch Around Water has long promoted the message that ‘Lifeguards are not babysitters!’ while last month the German Lifeguard Association (DLRG) - the biggest organisation of its kind in Europe - issued a warning that a growing number of child drownings in the country during the recent northern hemisphere summer were linked to their parents’ obsession with mobile phones.