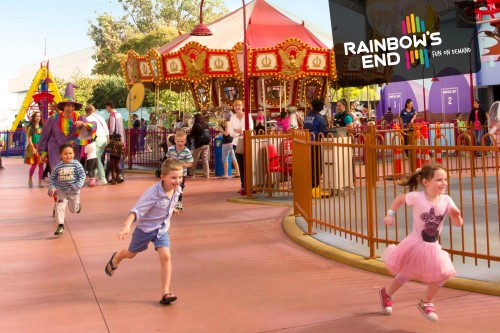 Presented overnight during the IAAPA Attractions Expo 2015 in Orlando, Florida, USA, Kidz Kingdom beat entries from around the globe to secure the award – a first for New Zealand.

Welcoming the international recognition, Rainbow’s End Chief Executive Chris Deere, stated “this is the first time an FEC has won in New Zealand and I’m so proud of the team and all the hard-work that is put in on a daily basis to make Kidz Kingdom such a standout attraction at Rainbow’s End.”

In judging the award a mystery shopper from IAAPA visited Kidz Kingdom to ascertain the standards in all areas from customer service, variety of rides, overall appeal of the area, right down to the café facilities.

Survey results where then reviewed by an expert panel of seven international judges, two of whom were past winners.

Costing just over $4.5 million, Kidz Kingdom features a number of rides for children under eight years and is completely covered allowing for year-round fun.

However, Deere believes that the it was the attraction’s overall attention to detail and ease for parents that really caught the judges eye, adding “we really wanted to ensure that kids had fun day out but that mum and dad felt completely relaxed too.

“There is a separate entrance for Kidz Kingdom, so less time in queues, storage for all the bags, buggies etc as well as an indoor café where parents can still keep an eye on the kids but enjoy a good coffee at the same time.”

Kidz Kingdom opened in December 2012 and has already led to a 350% rise in birthday party bookings, due in part to the state of the art party rooms, interactive games and Animalive computer generated attraction that personalises each birthday party.

The IAAPA Brass Ring Awards this year presented two new awards: one recognising team member incentives in the Human Resources Excellence category and the other for new concepts presented by an exhibitor at the trade show.

The 2015 IAAPA Brass Ring Awards were presented on the evening of Wednesday 18th November to amusement parks, water parks, zoos, aquariums, museums, FECs and suppliers from around the world to honour excellence in food and beverage, games and retail, human resources, live entertainment, marketing, new products and FECs.