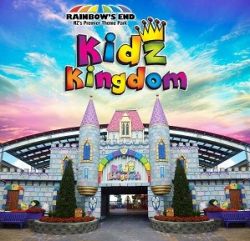 With stage one of Kidz Kingdom attraction having opened on Boxing Day 2012, Auckland theme park Rainbow's End is looking forward to a surge in visitor numbers.

$3.5 million is being spent in upgrading the former Castle Land into Kidz Kingdom, which already features birthday rooms and three new rides for children eight years and under. Now completely covered, with shelter from the sun and rain, the area is already is proving extremely popular.

Inspite of the disruption to operations caused by the development of Kidz Kingdom (full closure of the area was necessary to allow for the construction) and a dip in visitor numbers, Rainbow's End operator New Zealand Experience has announced draft results for the six months ended 31st December 2012 that indicate a net profit after tax which is comparable to that for the corresponding period to 31st December 2011.

2013 promises to be one of substantive change for the attraction, with stage two of Kidz Kingdom opening in April and ongoing refreshment of the main park.

Rainbow's End is also commencing the planning process for a major new attraction in the 2014 financial year.

New Zealand Experience Director Dave Lock "this development is expected to increase profit in the medium term and become an integral part of our core business in the years to come.

"In the near term profit will initially be impacted by some disruption during construction and as a result of increased continuing finance charges."

For more information go to www.rainbowsend.co.nz/