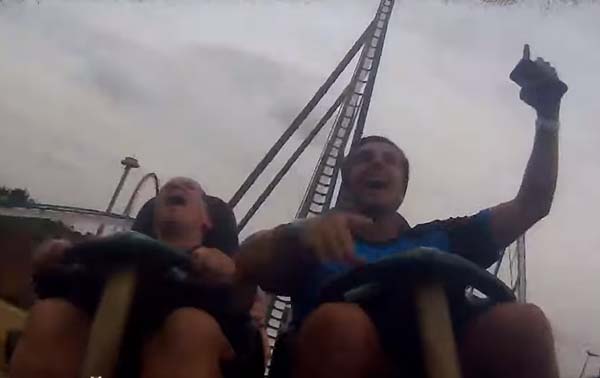 Following its awareness of the recent viral video showing a guest catching a flying cell phone while riding a roller coaster, IAAPA, the global association for the attractions industry, is encouraging members to refer to the association's advisory about the serious hazard loose articles can pose on amusement rides.

The video shows New Zealander Samuel Kempf catching an iPhone X dropped by another rider while traveling at high speed on the Shambhala roller coaster at the Port Aventura amusement park in Catalonia, Spain. Kempf spotted the flying phone and made a spectacular one-handed grab, then celebrated with the people sitting behind him.

IAAPA advises that with the proliferation of personal devices including cell phones, cameras, and 'selfie sticks' the long-standing industry policies restricting loose articles from rides and attractions should be reviewed.

'Selfie sticks' have proliferated as a natural outcome of ballooning global engagement in social networking using still and video imagery. A “selfie stick” is an expandable stick which a person attaches to a mobile phone or camera to help take a selfie (a photo of oneself and possibly others). It can be collapsed into its handle, becoming small and portable.

Almost all rides and attractions advise guests to 'hold on' and provide specific bars or other implements, which guests should grasp as needed. Distraction from this should be avoided as much as possible which any loose articles including the personal devices mentioned above may create, in addition to being potentially dangerous to other patrons if they are not secured or fall from a patron’s grasp.

Most rides are designed with specific ASTM, EN, or other ‘standard-defined’ reach envelopes in mind. These reach envelopes assume large, adult humans are trying to reach outside the ride vehicle, and the standards ask the designers to consider and mitigate this possible hazard. None of these standards assume that riders will be carrying 'reach extenders' on board with them. Canes, crutches, umbrellas, and the like have long been prohibited on most rides because of reach envelope hazards, and/or hazards that arise if such objects become loose in the ride vehicle or device during more dynamic motion.

IAAPA reminds ride owner/operators that they should enforce the safety criteria cited by the rides' designer/engineers, including the management of reach envelope from the ride vehicle or device and from nearby its perimeter.

The IAAPA Safety Committee strongly suggests that selfie sticks should be held to the same prohibition criteria as (e.g.) umbrellas for any hazardous scenarios on or near rides.

IAAPA also recommend consideration of other safety situations potentially changed by the introduction of selfie sticks in non-ride environments. Proximity to performers, animal compounds, dense crowd situations, where safety may be affected by the presence of these devices and risks posed to persons and property including valuable museum or other historic objects.