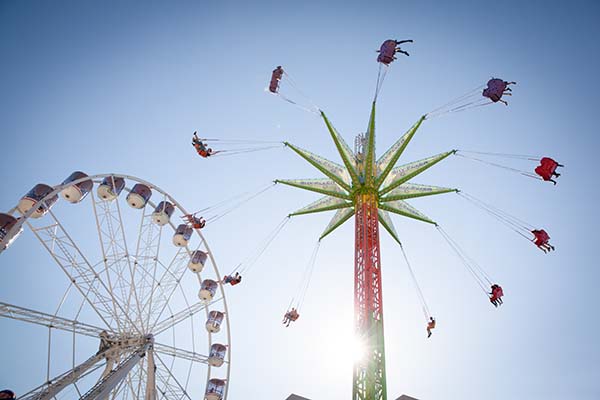 Workplace Health and Safety Queensland has completed a safety audit of amusement rides and equipment at this year’s Ekka.

Queensland Industrial Relations Minister Grace Grace advised Workplace Health and Safety Queensland (WHSQ) worked closely with amusement ride operators and the RNA to ensure Ekka patrons could be confident in their safety while enjoying the thrills in sideshow alley.

With the 2019 Ekka opening today, Minister Grace advised "the Ekka is a fantastic annual event which attracts hundreds of thousands of people from all over Australia to Brisbane.

“Every year, Workplace Health and Safety Queensland audits amusement rides and equipment at the Ekka to ensure patrons not only have a fun time, but a safe time too.

“All amusement rides and equipment have been thoroughly inspected and appropriate log books audited ahead of the gates opening this morning for the 142nd Royal Queensland Show.

During the traditional bump-in period, WHSQ has also been doing general safety checks around traffic management, licensing, construction and electrical issues. These inspections are done with the help of Licensing, Construction and Electrical Safety Office inspectors.

Minister Grace noted“WHSQ inspectors will be on site at the Ekka doing general safety patrols at least twice each day.

Fair Trading inspectors from the Queensland Government’s Office of Fair Trading have also combed through more than 200 showbags to ensure their contents are safe to use and comply with Australia’s relevant mandatory product safety requirements.

As part of its annual proactive safety campaign, showbag suppliers and Ekka vendors have been commended for working with Fair Trading on these compliance checks, enhancing cooperation built over previous Ekka seasons.

The wristbands which help to reunite lost children with their parents contributed to returning almost 100 children at the 2018 event.