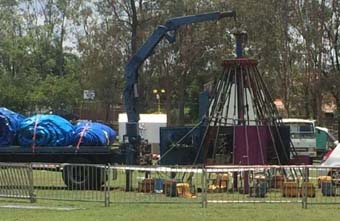 A 20-year-old carnival worker has been crushed to death while dismantling a fairground ride following a family 'Carols by Candlelight' event at Collingwood Park State School, west of Brisbane.

According to Queensland newspaper the Courier Mail, the man was helping to pack up at the event when he became trapped, reportedly sustaining “fairly traumatic and extreme crush and head injuries”.

Paramedics tried to save him but he was pronounced dead at the scene.

An advertisement for the event promised “seven different rides including a giant slide, a mega castle and a train.”

The ride was apparently operated by Brisbane-based Affordable Amusement Rides.

On site image believed to be of ride involved in the incident courtesy of the ABC.