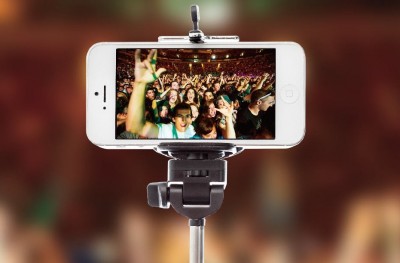 The promoter of the Soundwave music festival, currently being held in Sydney, Melbourne, Brisbane and Adelaide, has vowed to crack down on ‘selfie’ sticks, saying they are preventing concertgoers from enjoying live music.

As reported by Fairfax Media, Promoter AJ Maddah's concerns come as the Qantas Credit Union Arena confirmed that it too had recently cracked down on them by banning their use.

Etihad Staidum in Melbourne, Domain Stadium in Perth, Perth Arena, and Suncorp Stadium in Brisbane have also started stating in ticket terms and conditions of recent events that they would refuse to allow entry to any reveller carrying the photography aids, dubbed "wands of narcissism".

However, the Melbourne Cricket Ground has not yet placed restrictions on the selfie stick, saying it allowed them as long as they didn't "impede the view of those seated in the nearby area".

Maddah's concerns came to a head on Sunday, following the Adelaide Soundwave.

On Twitter, Maddah wrote "Dear people with those f---ing camera sticks: please have some consideration for people behind you trying to enjoy the show. Thank you.”

In a follow-up interview, Maddah told Fairfax there were about a dozen people using the sticks at the Adelaide event, stating "it is just the ultimate expression of narcissism.

He added that the "biggest problem with the sticks had been in Melbourne, with about 40 or 50 of them in use at the Soundwave there.

Maddah stated "most of them are pointed at the stage with kids taking photos.

“But I think the one that kind of put it in perspective for me was there was a band set going and a young girl pointed it at herself.

"It took every fibre of resistance I had not to just grab the stick off her and kick her out.

"But then I figured she may have possibly paid for her ticket and so I resisted."

Asked if he was going to allow the sticks at Sydney's Soundwave at Olympic Park this weekend, Maddah added "it's absolutely not going to happen. We're just not going to tolerate one person using them."

If people did arrive with them, Maddah said they were going to need to put them in a provided cloakroom.

Not only were the sticks enabling the "illegal recording" of a band's set, Maddah said, but they were also inconveniencing people around those who used them and causing safety issues

He concluded “it is insane that people don't have enough courtesy to care about the people around them.”