How did Geoffrey Rush’s alleged inappropriate behaviour end up in court? 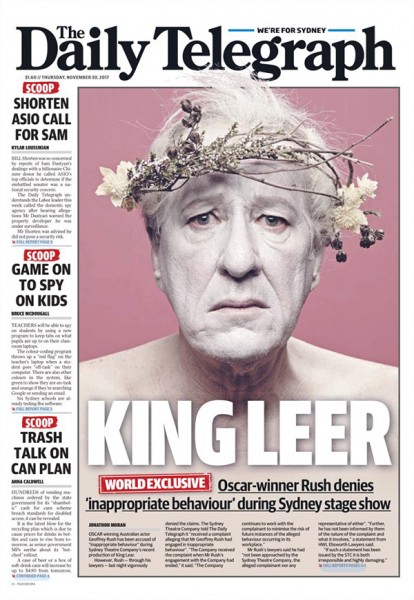 With sexual assault allegations in the entertainment industry having gained massive attention in the past few years, often as a result of thorough investigation, it is remarkable to contrast how the root of Oscar winning actor Geoffrey Rush’s case for defamation against the Daily Telegraph’s publisher Nationwide News and journalist Jonathon Moran is based on a single ‘off-the-record’ conversation.

When Sydney newspaper the Daily Telegraph ran the headline ‘King Leer’ on 30th November last year alongside a picture of Geoffrey Rush, it opened the possibility of a much needed review into sexual misconduct and harassment in the Australian entertainment industry.

To date, beyond statements condemning sexual harassment from state theatre companies and the Australian Major Performing Arts Group and a draft code of practice from Live Performance Australia, this has not happened.

Instead there is the spectacle currently being played out in a Sydney Court with Rush suing those behind the November 2017 article that claimed he had sexually harassed fellow cast member Eryn Jean Norvill during their performance in the Sydney Theatre Company (STC) production of King Lear, in 2015 and 2016.

The Daily Telegraph article was based on an apparently ‘off-the-record’ internal allegation made by Norvill about unspecified ‘inappropriate behaviour’ by Rush during the STC’s production of the play.

Reports suggest that Norvill’s comments were made in a conversation with two people - her agent and STC Company Manager Annalies Crowe according to accounts - in a bar rather than as a formal complaint.

How this conversation went further to reach Moran is uncertain and media covering this story have not made it clear as to the source of the ‘off-the-record’ conversation.

A suggestion made in the Sydney Morning Herald in February 2018 was that that, according to court documents, the allegations against Rush were brought to light by former child actor Sarah Monahan.

Monahan, who now lives in the USA, was the first to speak out against her Hey Dad! Co-star Robert Hughes, who, in 2014, was sentenced to at least six years in jail for abusing Monahan and three other young girls. 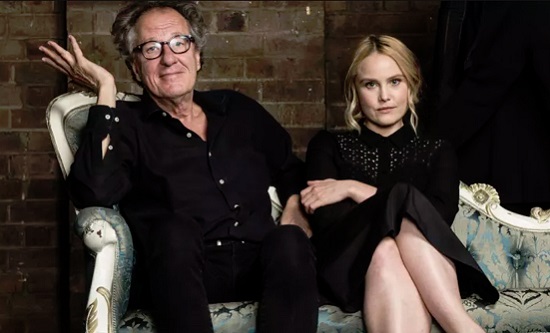 Tabloids including the Daily Mail suggested back in 2016 of a connection between Monahan’s ‘leaking’ of Norvill’s claims and Monahan’s resentment towards Cate Blanchett’s 2014 Best Actress Oscar speech. In this speech Blanchett thanked her agent, Robyn Gardiner, who was also Hughes’s wife. Blanchett has either directed or performed in 13 STC productions and overseen five seasons as Co- Artistic Director.

According to Chrysanthou, the STC, which had become aware of Norvill’s ‘allegations’, hadn’t investigated or taken any other action on the matter. However, Chrysanthou claims McIntyre to be the source of the story, having been approached by a reporter 18 months after Norvill’s ‘off-the record’ conversation in the bar. Chrysanthou suggests that McIntyre made an off-the-record and not-to-be-attributed comment to the Telegraph’s Moran in November 2017, but told Moran that he could publish it.

Jennifer Wilson writing for Independent Australia on 30th October 2018 questions McIntyre's actions, reporting “the fact Norvill made no formal complaint against Rush indicates her desire to keep the matter private. She no doubt had good reasons for arriving at this decision - not least of which might have been the power imbalance between herself and Mr Rush and concern for her future in the very small world of Australian theatre.

“Ms Norvill … made the choice to keep her counsel and avoid the damage to her reputation and her prospects that would almost certainly ensue from a formal complaint of sexual harassment against an internationally famous and highly respected actor. This was Ms Norvill’s choice to make - and only Ms Norvill’s.

“Ms Norvill has now been placed in a most invidious position. A veritable army of film and stage luminaries has paraded before Justice Michael Wigney, who is presiding over the defamation proceedings. Every one of them has vehemently denied the possibility Rush sexually harassed her. In other words, these luminaries are implying that Norvill is lying and that such action by Rush is entirely unthinkable.

“As a witness for the Daily Telegraph, Norvill is being asked to stand her ground against a battalion of intimidatingly successful colleagues, all bent on supporting Rush. It is her only opportunity to defend herself, something she should not have to do and, indeed, had chosen not to do, until McIntyre exposed her.”

The STC and McIntyre’s role in not investigating the claims against the Academy Award winning actor and former Australian of the Year may also be worthy of further scrutiny. While Norvill’s comments were never submitted as a formal complaint, the STC may have been protecting Rush in the light of its current financial state, recorded the biggest deficit in its 39-year history, a $4.2 million budget reverse in 2017. 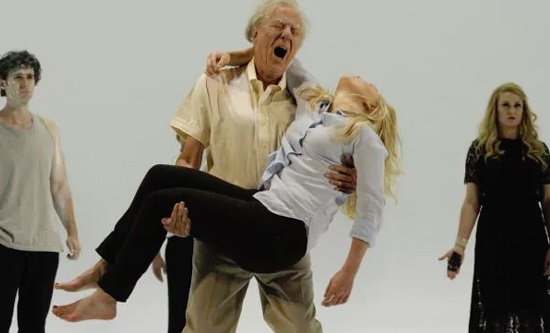 In addition, in early 2016 the STC was accused by unions of failing to provide a safe workplace, with the Media, Entertainment & Arts Alliance (MEAA), the union representing STC staff, saying that management had been “putting its commercial interests ahead of the health and safety of its staff.”

Wilson proposes that a possible motive for the Telegraph and its journalist Moran was to “score a #MeToo scoop - an Australian equivalent to Hollywood revelations of sexually offensive behaviours by high profile male actors and producers.”

The SMH report that in his opening address to the court on 22nd October 2018, Rush's barrister Bruce McClintock, SC, claimed the Telegraph to be "desperate" and "looking for a (Harvey) Weinstein story" after being "gazumped" by the Herald's stories on former Nine presenter Don Burke.

McClintock said of the stories, which served to "smash and destroy" his client's reputation “it was clearly not an urgent story except in the sense that the Telegraph wanted to counter the success Fairfax had had with the Don Burke story.”

In documents filed in court, Rush's lawyers say the stories convey a string of defamatory imputations including that he is "a pervert" and "sexual predator" who engaged in "scandalously inappropriate behaviour in the theatre".

Nationwide News is defending the reports on the basis the allegations are true.

ABC’s recent reporting on the defamation trial states Norvill told the court that her older female colleagues in an STC production "enabled" Rush’s alleged harassment. Norvill claimed a culture of bullying, harassment and "normalised" inappropriate behaviour existed within her industry.

Pressing Norvill on her evidence from Tuesday that the rehearsal room was "complicit" when Rush allegedly made sexual gestures towards her, McClintock questioned whether Norvill was also referring to Robyn Nevin (who played the Fool in STC’s King Lear) in that statement. Norvill replied that she and Nevin were from different generations and insisted that Nevin had enabled the alleged behaviour.

During his cross examination, McClintock questioned why key claims Norvill made in court were not in a statement she signed in August.

McClintock accused Norvill of fabricating allegations about Rush which she aired during a meeting with STC's Annelies Crowe.

McClintock asked "what I want to suggest to you is you told Ms Crowe … a whole pack of disgusting lies about my client. Do you agree with that, or not?"

The actress replied "no I don't."