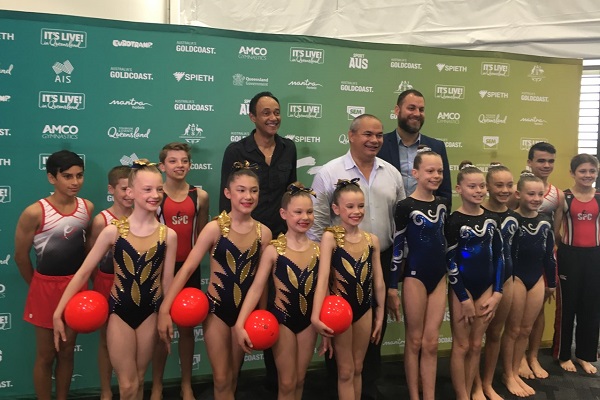 One million people have passed through the doors of the Gold Coast Sports and Leisure Centre since the Gold Coast 2018 Commonwealth Games, with almost 650,000 to date this year.

The Carrara venue generated $46 million for the economy in the past financial year and since opening in early 2017, has hosted 90 major events, as well as hundreds of individual business events.

This week, the centre is playing host to the National Club Gymnastics Carnival, which has drawn 60,000 people to the city.

Visiting the venue today, Gold Coast Mayor Tom Tate advised that the venue is a superb example of the Games legacy, stating “this facility is consistently attracting national and interstate sporting competitions along with conferences and expos.

“There are 24 major events booked in the next six months.”

“It’s also benefitting the local community on a daily basis by providing a place for the development of grass roots sports training and competition.”

“At the end of the day it’s strengthening the Gold Coast’s reputation, helping our economy and providing the necessary sports infrastructure for a growing city.”

Mayor Tate said the City was now working closely with Destination Gold Coast (DGC) in an effort to secure a greater share of the conference market.

Battista added “Gold Coast’s business events market is valued at over $540 million annually to the economy, which is set to boon as collaboration with industry partners continues to soar.

“Our city has never been in a better position to attract event organisers and their delegates, with a growing conference market setting the pace.

“The flow-on effect for tourism and for the economy from business events is substantial, with a vast majority of dollars ending up in accommodation facilities, restaurants, attractions and tourism experiences.”

The Gold Coast Sports and Leisure Centre has a 5.000 plus seat capacity grandstand, two indoor halls connected by a pedestrian plaza. Its mixed-use sports courts can accommodate basketball, netball, indoor soccer and volleyball.

The show hall also has the ability to be transformed for major sporting events, corporate banquets, exhibitions and trade shows.