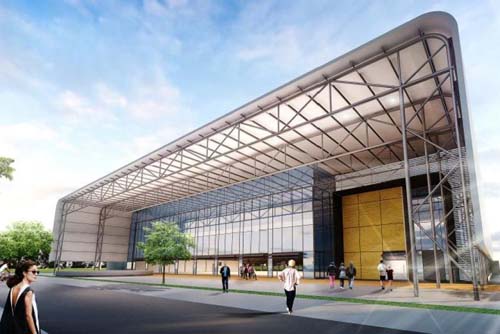 The final list of venues for the 2018 Gold Coast Commonwealth Games includes a 10,000 metre2 indoor sports arena to be built on the northern Gold Coast.

Included in the masterplan for sports and venues apporoved by the Commonwealth Games Federation, the Coomera Sport and Leisure Centre will host gymnastics, basketball and netball during the finals. It will feature nine indoor sports courts suitable for basketball and netball and 2500 metres2 for a dedicated gym, outdoor courts, change rooms, administration and a café.

During the Games, temporary seating will give the venue a 7,500 seat capacity.

Building on their experience at the Commonwealth Games in Malaysia in 1998, Melbourne in 2006 and Delhi in 2010, Peddle Thorp Melbourne and BDA Architecture are planning an innovative centre for the Brisbane 2018 games.

Peddle Thorp Director Peter Brook explains “the integration of a major sporting venue within a community sports complex presents the architectural team with some unique challenges in terms of space and environment.

“While in Games mode, the venue is required to be fully air conditioned.

“However, the community facility is specifically designed to optimise ‘passive’ systems when it becomes a legacy for the community.

“It will have systems to minimise the use of light, power and water, but major events can be ‘bumped in’ and ‘bumped out’ with relative ease.”

In response to the multi-functional requirements, BDA Architecture and Peddle Thorp Melbourne have employed a design philosophy of ‘simplicity promotes flexibility’ to provide a framework that supports a number of differing configurations, providing flexibility for the community.

The BDA Architecture/Peddle Thorp Melbourne consortium was one of six submissions for the facility.

2018 Commonwealth Games Federation Chairman Nigel Chamier says the facility will be available for a variety of uses ahead of the 2018 Games, stating “that part of the Gold Coast needs facilities, it doesn't have much in the way of sporting venues so this is just a wonderful addition."

The 2018 Gold Coast Commonwealth Games are expected to attract more than 6,500 athletes and team officials from 70 member nations and territories.