Dreamworld to remove mountain surrounding its Eureka Mountain Mine Ride 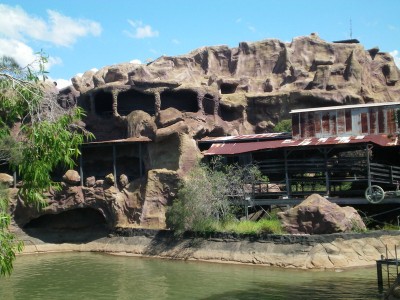 Gold Coast theme park Dreamworld has today announced the removal of the mountain that surrounds the long-defunct Eureka Mountain Mine Ride.

While the decaying foam mountain will soon be a thing of the past, the future of the Mine Ride, which closed in November 2006, remains uncertain with an accurate assessment of its future to be made once its surrounds have been removed.

Dreamworld today left a short Facebook message that indicates that work is commencing on the redundant area of the park.

In 2015, it was reported that Dreamworld’s management was considering plans to reopen the Eureka Mountain Mine Ride after a decade of closure that saw the ride collect dust and the mountain surrounding it literally rot.

With the shocking accident on the neighbouring Thunder River Rapids which killed four riders, the fate of the Mine Ride was unsure.

However, a press release from Dreamworld in June indicated that plans to resurrect the Mine Ride were still underway.

Dreamworld's message today spells out that the work extends only to the structure covering the ride.