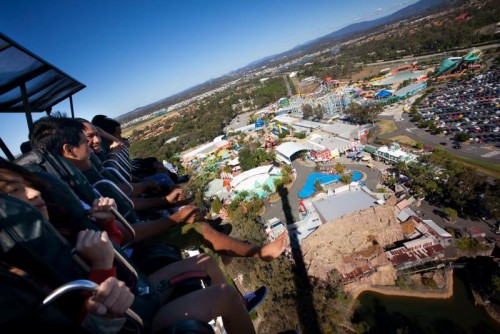 Following ongoing reports of a potential sale of Gold Coast theme park Dreamworld to an overseas buyer, Dreamworld Chief Executive Craig Davidson has advised staff that the attraction is not for sale.

In a memo to staff released by the Gold Coast Bulletin, Davidson advised “no, we are not for sale ... you will be the first to know if that changes.”

Davidson’s assurance preceeded a notice to the Australian Stock Exchange from parent company Ardent Leisure today that states they are exploring the rezoning of land at the Coomera site that would allow further, non-theme park development, believed to be for a hotel and entertainment precinct.

As part of this review Ardent has appointed a town planner to assess the feasibility of rezoning parts of the precinct. Ardent stated that it will continue to engage with third party developers to discuss potential development opportunities and timing for any redevelopment within the precinct.

The announcement follows Ardent Leisure Chief Financial Officer Richard Johnson – who will leave the company in July after 13 years in the role – having told shareholders at their February 2017 half year presentation that the value of Dreamworld could increase with different zoning.

At the moment the zoning is parks and entertainment while a different zoning, such as residential or commercial, could increase that value quite significantly.

Ardent Leisure owns a significant amount of undevelped land to the north of Dreamworld in close proximity to the Coomera Westfield currently under construction.

However, in today’s announcement Ardent Leisure restates a commitment to the ongoing development and recovery of Dreamworld as one of the Gold Coast's premier tourist attractions.

It advises “notwithstanding the review of the Master Plan, Ardent will continue to invest in Dreamworld to facilitate its recovery and ensure it remains one of the Gold Coast’s key tourist attractions."

Ardent Leisure Chief Executive Deborah Thomas said the park sat on 60 hectares of land but only about half of that space was being used.

Thomas explained "we haven't locked anything down at this point, but if you look at theme parks around the world, if you look at Disney, at Universal Studios, you'll see there's always an entertainment precincts with other attractions, with restaurants, with shops."

Thomas said the company's priority was returning the park to the levels seen prior to the death of four guests last October.

She concluded “we're really thankful and grateful for the support we've got from the people of the Gold Coast as well as the broader community and the Government.”
No timeline was given for any development at Dreamworld.

Image: Dreamworld from The Giant Drop.