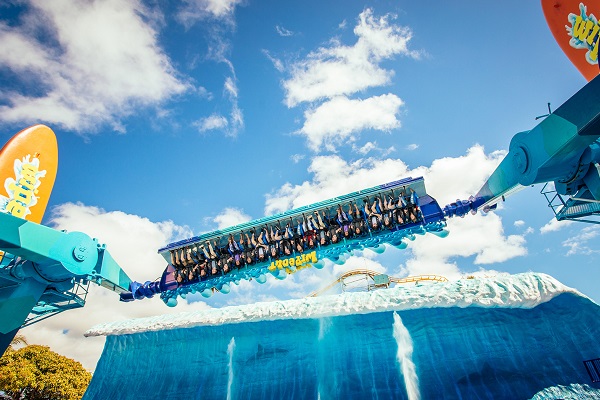 Gold Coast theme park Dreamworld has announced the permanent closure and retirement of its popular The WipeOut ride.

In a statement, the Ardent Leisure owned attraction has advised “Dreamworld would like to thank the millions of guests who have taken on the challenge of flipping, spinning, twisting and tumbling on the WipeOut since it opened.”

Launched in 1993 at a cost of over $6 million, at the time of its opening the surf themed ride was pitched to audiences as “the wildest ride of your life” and the first ride of its kind in the Southern Hemisphere.

Manufactured by Dutch ride specialists Vekoma, the Waikiki Wave Super Flip is a spinning gondola taking guests through a series of 360 degree revolutions. Sat between two 14-metre high Malibu surfboards, the gondola swirled over a water tank as two large steel arms on either side rotate in opposite directions.

However, with the ride now more than 25 years old, frequent closures for maintenance have forced the closure.

Ardent Leisure, which has previously committed to add further attractions to Dreamworld, is not looking to replace it at this time. Instead its site will become a shaded seating space for guests.

Writing on the closure on the Parkz.com.au ride enthusiasts website, Richard Wilson commented “WipeOut was bright, iconic and introduced a sense of kinetic energy into Dreamworld that remains unbeaten to this day. There has never been a better ride in Australia to simply observe.”

Crediting the opening of the WipeOut in 1993 with changing Dreamworld’s then troubled finances, Wilson added “and yet with the disastrous announcement of WipeOut's permanent closure ... Dreamworld (is) bewilderingly turn their back on a simple, deftly executed strategy that saved the park once before.”

Dreamworld is currently moving towards opening its much delayed Sky Voyager attraction.

Dreamworld Chief Executive, John Osborne advised  “we continue to look at opportunities for further investment into the park, and have some exciting news to announce next week, as well as the opening of our world-class flying theatre Sky Voyager.”

Dreamworld is inviting the sharing of WipeOut memories on Instagram using #wipeoutmemories.

Images of The WipeOut ride courtesy of Dreamworld.