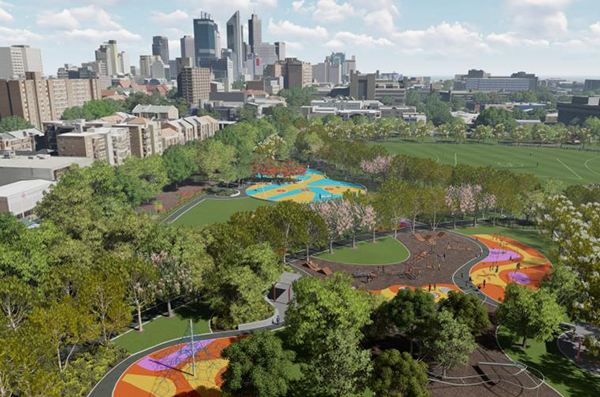 Residents and community groups are being asked by the City of Perth to provide input for the final design of the inter-generational playground, as part of the redevelopment of Wellington Square.

The Wellington Square Final Masterplan was endorsed by Council in September last year, and the project is now moving into detailed design and implementation.

Chair Commissioner Eric Lumsden said the Wellington Square enhancement will be delivered in three stages, with work on stage one expected to begin late next month, commenting "the first stage of the enhancement project will see the development of basketball courts, new amenity block, place of reflection and primary path ways.

“Community feedback was integral to the design of stage one, and the City is now calling on the community for ideas on what the final design of the intergenerational playground will look like.

“Traditionally playspaces in the past were considered the domain of young children, but the current best practice across the world is to create welcoming fun playspaces that everyone in the community can enjoy.”

The intergenerational playground will be a cornerstone of the redevelopment work, and has been identified as part of stage two upgrades.

Community feedback will be open until 2nd May 2019.

Click here for more information and to take the City of Perth’s feedback survey.